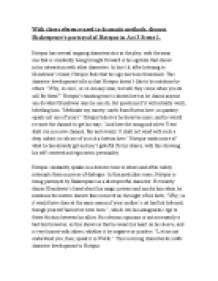 ﻿With close reference used to dramatic methods, discuss Shakespeare?s portrayal of Hotspur in Act 3 Scene 1. Hotspur has several ongoing characteristics in the play, with the main one that is constantly being brought forward is his egotism that shows in his interaction with other characters. In line 16, after listening to Glendower?s boast, Hotspur feels that his ego has been threatened. This character development tells us that Hotspur doesn?t like to be outshone by others. ?Why, so can I, or so can any man, but will they come when you do call for them?? Hotspur?s taunting tone is shown here as he claims anyone can do what Glendower says he can do, but questions if it will actually work, belittling him. ?Methinks my moiety, north from Burton here, in quantity equals not one of yours.? Hotspur believes he deserves more, and he would re-route the channel to get his way; ?And here the smug and silver Trent shall run in a new channel, fair and evenly. ...read more.

?Let me not understand you, then; speak it in Welsh.? This recurring characteristic adds character development to Hotspur. When it comes to plot development, Hotspur forgetting the map at the start of the scene shows that he is impractical and has a lack of foresight. Also, his lack of sophistication and refinement is shown when he insults literature, meaning Shakespeare portrays Hotspur as very uncultured. His fiery and argumentative side is exhibited with his use of imagery in the scene, however his political naivety in also revealed as he allows personal feelings to intrude on his personal relationships, and presents his lack of diplomatic maturity. Hotspur?s arrogance is exposed when he begins arguing for the sake of arguing after interaction with Glendower in a battle of wills makes Hotspur boast after Glendower gives in, and once again feeds into his egotistical side. Another thing established in this scene is Hotspur?s reputation, as after more interaction with Glendower, he reveals what others say about him and that he has a renowned, infamous and fearsome reputation. ...read more.

Heart, you swear like a comfit-maker?s wife!? He tries one last time to convince her ?Come, sing.? But she still won?t, to which he leaves in anger; ?I?ll away within these two hours, and so come in when ye will.? and leaves her in tears. Hotspur disregards other?s feelings and wishes, even his Lady?s. This brings up Hotspur?s cruel ways and his childlike actions when he does not get his way, along with his selfishness, and his irresponsibility towards his personal relationships. In this scene, Shakespeare continues to portray Hotspur with a mocking attitude, a hot tempered mind, his open mind and the fact that he is a ruthless fighter, and starts to bring up his self centered, impatient and immature acts, that is mainly brought to our attention through his interaction with other characters and his actions during heated and normal moments, from battle, to conversations in the Boar?s Head Tavern. ...read more.