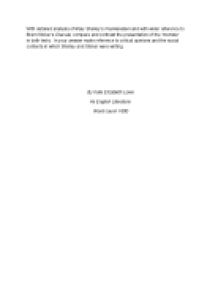 With detailed analysis of Mary Shelleys Frankenstein and with wider reference to Bram Stokers Dracula, compare and contrast the presentation of the monster in both texts. In your answer make reference to critical opinions and the social contexts in which Shelley and Stoker were writing.

﻿With detailed analysis of Mary Shelley?s Frankenstein and with wider reference to Bram Stoker?s Dracula, compare and contrast the presentation of the ?monster? in both texts. In your answer make reference to critical opinions and the social contexts in which Shelley and Stoker were writing. By Kate Elizabeth Lowe As English Literature Word count- 1650 The Oxford English dictionary defines ?monster? as ?legendary?. Words, such as ?demon?, ?colossus?, ?gruesome ?and ?dreadfully repulsive? refers to the physiognomy of this ?other being?. In two Gothic novels, Frankenstein by Mary Shelley, and Dracula by Bram Stoker, the monster is a crucial element. The Gothic genre was popular in the Nineteenth Century, and the monster is a key theme, as in Dr Jekyll and Mr Hyde. Shelley?s passion and desire to ?curdle the blood and quicken the beatings of the heart? (Shelley, 1818) comes through vividly in Frankenstein. Frankenstein?s creature has the appearance of a monster and is also cruel; however, in contrast to Dracula, who is wholly evil, and who wants to corrupt society, the creature was born good and is corrupted by society. As Botting argues, ?Monster was a standard, almost technical term of criticism in the eighteenth century and one applied to Frankenstein itself: one reviewer called it a monstrous literary abortion? (Botting, 1995, p5). The theme of physiognomy is key to both Frankenstein and Dracula. The word physiognomy, from the Greek word meaning ?physis? meaning ?nature? is the assessment of a person?s temperament and character from outward appearance which was popular in the nineteenth century. ...read more.

This particular point in the novel Shelley develops her presentation of him as a child e.g. pain invading him ? the reader feels sympathy for him; the moon guides him; the bird ?salute? him. The effect of this emphasises his closeness to nature, nature mothers him and accepts him unlike society. It is evident from the language used by the monster that the reader is faced with an almost civilised human being, who now makes its first steps towards maturity as a child would. It is confusion, rather than monstrosity, which is expressed by the creature in this early stage. This surprises the reader, as a false impression was gained from Victor?s description (bookrags.com, 2006). The creature has human characteristics. The monster calls itself a 'poor, miserable wretch' (Shelley, 1818, p98) and recognises its hideousness. The fact that it 'sat down and wept' (p.98) indicates its humanity as it feels emotion as any human would therefore we can determine that the real monster is determined by suffering and oppression. It?s 'overcome with delight at the warmth I experienced from a nearby fire? (p.99/100) and cries with 'pain' as ?I thrust its hands into the live embers' (p.100). It appreciates beauty in nature and tries to mimic sounds of 'the pleasant songs of the birds' (p.99). Here Shelley conveys the creature?s innocence more as it is in the process of learning and maturing however, the 'inarticulate sounds which broke from me frightened me into silence again' (p.99). ...read more.