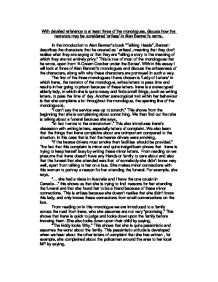 With detailed reference to at least three of the monologues, discuss how the narrators may be considered 'artless' in Alan Bennett's terms.

With detailed reference to at least three of the monologues, discuss how the narrators may be considered 'artless' in Alan Bennett's terms. In the introduction to Alan Bennett's book "Talking Heads", Bennett describes the characters that he created as 'artless', meaning that they don't realise what they are saying or that they are "telling a story to the meaning of which they are not entirely privy." This is true of most of the monologues that he wrote, apart from 'A Cream Cracker under the Settee'. Within this essay I will look at three of Alan Bennett's monologues and discuss the artlessness of the characters, along with why these characters are portrayed in such a way. The first of the three monologues I have chosen is 'Lady of Letters' in which Irene, the narrator of the monologue, writes letters to pass time and results in her going to prison because of these letters. Irene is a stereotyped elderly lady, in which she is quite nosey and finds small things, such as writing letters, to pass the time of day. Another stereotypical trait within her behaviour is that she complains a lot throughout the monologue, the opening line of the monologue is, "I can't say the service was up to scratch." ...read more.

It's just a holiday camp. Do you wonder there's crime?" This is ironic because of how she is enjoying herself in the prison because she is happier. She also talks about happiness saying, "So if you get the heroine saying 'I don't suppose I shall ever be happy', then you can bank on it that there's happiness just around the corner." However her last line within the monologue is, "And I am so happy." Showing a contrast between what she feels before she goes into prison and while se is in prison. Irene shows an artless nature because she doesn't realise the effect of her letters on the community. She also shows a contrast to what she says and how she feels about prison and her happiness. Another one of Alan Bennett's monologues that is particularly artless is 'Her Big Chance' with Julie Walters playing the part of the narrator, Lesley, who is an unsuccessful actor who gets work by sleeping with people and using her body to get noticed off men. Bennett opens the monologue with a shocking line. "I just shot a man last week." This gets the audiences attention from the beginning of the monologue. ...read more.

Zulema says to Doris, "What you don't understand, Doris, is that I am the only person that stands between you and Stafford House." This shows us that Zulema isn't very nice to Doris and would prefer if she was in the nursing hoe 'Stafford House.' Things start to get emotional within the monologue when she talks about the baby that her and her husband, Wilfred, were going to have. "The midwife said he wasn't fit to be called anything and had we any newspaper?" This is quite emotional because she is talking about the midwife taking away their child, who had died, in newspaper as if he was 'dirty' This monologue is unable to be artless because it is so emotional and she isn't thinking about herself apart from not wanting to go into a home. "I don't want to be stuck with a load of old lasses. And they all smell of pee." This shows that she has strong feelings about going into a home and knows that she wouldn't like it. In conclusion, all, but one, of Alan Bennett's monologues are considered to star artless narrators. Although some of the monologues are less artless than other, for example, Graham in 'A Chip in the Sugar' is far more artless than Susan in 'Bed Among the Lentils' but both are considered to have artless qualities. ...read more.