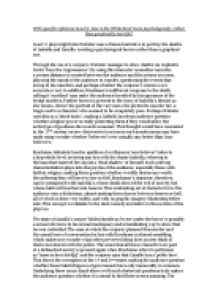 With reference to Act 2, show how 'The White Devil' is psychologically rather than graphically horrific.

﻿With specific reference to act 2, how is the White Devil more psychologically, rather than graphically, horrific? In act 2, playwright John Webster uses a framed narrative to portray the deaths of Isabella and Camillo, creating a psychological horror rather than a graphical one. Through the use of a conjuror, Webster manages to show deaths via ?sophistic tricks? from the ?nigromancer?. By using this character as another narrator, a certain distance is created between the audience and the actions on scene, allowing the minds of the audience to wander, questioning the events that led up to the murders, and perhaps whether the conjuror?s visions were accurate or not. In addition, Brachiano?s indifferent response to the death, calling it ?excellent? may make the audience horrified by his ignorance of the brutal murders. Further horror is present in the irony of Isabella?s demise as she ?kisses?thrice? the portrait of the very man who plotted to murder her, a tragic end to a character who seemed to be completely pure. ...read more.

This contrasting set of character force the audience into a dichotomy, almost making them choose between heaven or h**l, all of which is done very subtly, and with no graphic imagery illustrating either side. This concept is relatable to the dark comedy and satire in this section of the play too. The state of Camillo?s corpse ?folded double as ?twere under the horse? is possibly a s****l reference to his s****l inadequacy and a humiliating way to show that he was cuckolded. The ease at which the conjuror planned this murder and the casual tone of conversation he has with Brachiano is almost unsettling, which makes one wonder what other perverted ideas does society think of that is not shared with the public. The sense that all these characters are part of a debauched society is present again when Brachiano refers to politcians as ?a***s in foot cloth[s]? and the conjuror says that Camillo has a ?politic face?. ...read more.

Entering into the dumb shows can certainly be described as transgression as now the audience lies watching, in voyeur of Isabella and Camillo?s private lives. Our positions as observers can be classified as just as immoral as the corrupt acts we are watching; horrific if you then question if we are hypocritical in judging the characters of the play. Light can be shed on this seemingly doomed society when the conjuror is left alone to say ?Both flowers and weeds spring when the sun is warm, and great men do great good, or else great harm.? Perhaps an indication, that once these murders become public knowledge, someone will respond with justice and corrupt leaders like Brachiano will be ?weed[ed]? out. This ends act 2 on an ambiguous note, with the audience now having to wait to learn about the effects of Isabella and Camillo?s death. Also, they are left with the consideration that religion may not provide them with what is humanly attainable, only hope of heaven once you have already died. ...read more.