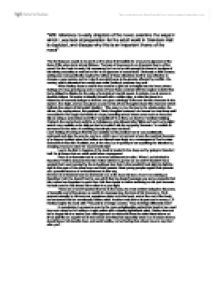 &quot;With reference to early chapters of the novel, examine the ways in which Leos lack of preparation for the adult world in Brandam Hall is depicted, and discuss why this is an important theme of the novel&quot;

"With reference to early chapters of the novel, examine the ways in which Leos lack of preparation for the adult world in Brandam Hall is depicted, and discuss why this is an important theme of the novel" The Go Between needs to be set in a time when it is feasible for a boy to be ignorant of the facts of life when he is almost thirteen. The loss of innocence is an important theme of the novel. For the book to work, it is necessary for Leo to be old enough for there to be signs of his stirring sexuality as well as for him to be ignorant of actual facts. Obviously a 20th century setting was not specifically required for either of these situations but it is very effective to choose a new century and to make it one which was to be gravely affected by conflict - the century which witnessed two world wars suits Hartley's purpose very well. ...read more.

Crying in the real school world is an indulgence only allowed after 'lights out' and Leo's plight seems very realistic as he tells us that he couldn't ask for sympathy because ' to confide in someone for the sake of confiding; that simply was not done.' Leo's feeling of having to find his own solution to his predicament is very realistically portrayed and also the way he can be a victim one moment and a here the next just because of a chance incident when the bullies are injured seemingly as a consequent of Leo's curse. School life is like this. Realistic, too, is the way Leo is portrayed as exploiting the situation by charging money in return for necromantic tips! Leo in the first 3 chapters of the book is landed in the deep end by going to Brandam hall. He is thrown into an adult world when unprepared. Fear of embarrassment is a common adolescent emotion. ...read more.

There are a lot of important themes in the book, the most evident being the discovery of sexuality and of the grown up world of a teenage boy, the loss of his innocence. He is scarred s******y by his summer experience later on in the book, and at the end of the book, he has turned into an emotionally hollow adult. Another main theme is past and memory; L.P Hartley begins the book with "The past is a foreign country. They do things differently here" In conclusion, Leo seems even in the more unbelievable parts of the book to be a real boy even when he is making a magic potion with a deadly nightshade plant. Harley does not let us forget this is a twelve year olds approach to witchcraft thus the weird ritual seems at times just like an experiment in the school chemistry lab especially when Leo is aware that he should leave 'all utensils clean and workmanlike, remembering that others have to use them after you". ...read more.