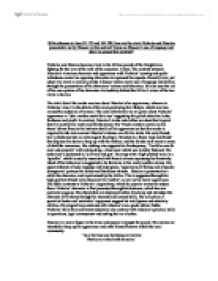 With reference to lines 91-112 and 163-290, how are the rivals Nicholas and Absalon presented to us by Chaucer in this section? Focus on Chaucer(TM)s use of language and detail to present this contrast?

With reference to lines 91-112 and 163-290, how are the rivals Nicholas and Absalon presented to us by Chaucer in this section? Focus on Chaucer's use of language and detail to present this contrast? Nicholas and Absalon become rivals in the Millers parody of the Knights tale, fighting for the love of the wife of the carpenter, Alison. The contrast between Absalon's vivacious character and appearance with Nicholas' cunning and quick- wittedness create two opposing characters to represent the aspects of courtly love, yet adapt it to create a comical parody. Chaucer makes clever use of language and diction through the presentation of his characters' actions and behaviour. He also uses the aid of his own opinion of his characters laid subtlety behind the Miller's views of the two rivals in his tale. The initial detail the reader receives about Absalon is his appearance, whereas in Nicholas' case it is the details of his room portraying his lifestyle, which revolves around the seduction of women. The only information we are given about Nicholas' appearance is 'lyk a maiden meek for to see' suggesting his girlish attractive looks, freshness and youth. In contrast, Absalon's looks and clothes are described in great detail to portray his vanity and flamboyancy. ...read more.

However, both characters share a main interest in women. Although the interaction with women and their views oppose each other, they both are rivals for Alison's love. Both Characters help create the parody of the Knights tale by twisting the theme of courtly love and separating the factors that make a courtly lover and creating quite distinct contrasts to the love rivalry displayed between Arcite and Palamon. Nicholas' behaviour towards Alison is quite vulgar and forceful as he objectifies Alison as a s*x object and physically seduces her through kissing her and stroking her, 'And heeld hire by the haunchebones'. These are not the actions of a courtly lover yet he uses the language of a knight. ' Or I wol dyen, also God me save', as he begs for mercy for his life as he claims that he cannot live without her love, he creates a persona that he is a courtly lover, although his actions suggest otherwise. In comparison, Absalon creates a very different image and uses other influences from the courtly love approach. His attitudes towards women display his admiration and longing for a love that he cannot receive. 'And many a lovely look on hem he caste', suggests that Absalon looks upon women amorously but does not make any physical suggestion towards them. ...read more.

Simple language indicates a crude sexuality in Nicholas that juxtaposes against his language that is eloquent and courtly. His aristocratic behaviour is brought into perspective by provincial behaviour and aspirations for Alison. Chaucer uses the Miller's voice for his description of Absalon rather than voicing his own opinion amongst the text. This emphasises the disapproval of the character by the storyteller. The Miller's mock admiration coincides with the use of an energetic, comical character that Chaucer has used to create a light-hearted tone. In summary, Absalon strives to have exactly what Nicholas has without being aware of it. Absalon's enthusiastic vanity and interest in making himself look the best that he can contrasts against Nicholas' natural meekness and good looks. Absalon wishes to have affairs with the women of the Parish just as Nicholas has, and helped wives make cuckolds of their husbands. Nicholas' education and scholastics are sought through Absalon's service skills such as barber work, and his little 'rubible' is totally inferior in comparison to the harp that Nicholas so graciously plays at night time to woo women. Finally, the main thing that both men want- yet Nicholas already has is Alison's requited affections. This creates two love rivals who are totally different yet share the same ambitions. ...read more.