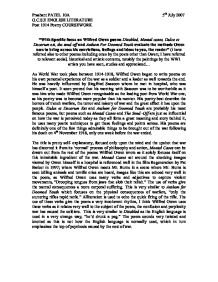 &quot;With Specific focus on Wilfred Owen poems Disabled, Mental cases, Dulce et Decorum est, the send off and Anthem For Doomed Youth evaluate the methods Owen uses to bring across his convictions, feelings and ideas to you, the reader&quot; (i have referred also

"With Specific focus on Wilfred Owen poems Disabled, Mental cases, Dulce et Decorum est, the send off and Anthem For Doomed Youth evaluate the methods Owen uses to bring across his convictions, feelings and ideas to you, the reader" (i have referred also to other poems including ones by the poets other than Owen; I have referred to relevant social, historical and artistic contexts, notably the paintings by the WW1 artists you have seen, studies and appreciated... As World War took place between 1914-1918, Wilfred Owen began to write poems on his own personal experience of the war as a soldier and a leader as well towards the end. He was heavily influenced by Siegfried Sassoon whom he met in hospital, who was himself a poet. It soon proved that his meeting with Sassoon was to be worthwhile as it was him who made Wilfred Owen recognisable as the leading poet from World War one, as his poetry was to become more popular than his mentor. His poetry best describe the horrors of trench warfare, the terror and misery of war and the great effect it has upon the people. Dulce et Decorum Est and Anthem for Doomed Youth are probably his most famous poems, but poems such as Mental Cases and The Send -Off are just as influential on how the war is perceived today as they all form a great meaning and story behind it, he uses many poetic techniques to get these feelings and points across. ...read more.

The devastation and hollowness of war cannot be best portrayed other than in 'over the top' by Robert Nash. It is very appropriate as it shows dead bodies with no wounds, implying that they have died of the cold. The soldiers have arched backs and they look as if they are walking out the trenches through the snow with no real emergency, care or passion and not even resilience against the enemy, they were very unenthusiastic. I think this painting best portrays Mental Cases, The Send-Off, Disabled and Anthem for Doomed Youth, as the consequences of war left people with no hope compared amongst the initial perceptions of war. Dulce et Decorum Est is probably the most famous poem written by Wilfred Owen. Dulce et Decorum Est is a Latin Saying and it was said a lot before the First World War, it means "It is sweet and right" this coincides well with the ending of the poem which says, "Dulce et Decorum est pro patria mori." which translates as "it is right to die for your country." Wilfred Owen is saying that to fight for your country is an enormous feat and honour and it is magnificent thing to do and should be the highest point of your life. This is quite ironic of him, and satirises what the war was really like as in the core of the poem he focuses on the ...read more.

It is pretty obvious that such poems as Dulce et Decorum Est and Anthem for Doomed Youth have been based upon poems such as this. When Owen died in 1918, there was a role reversal in that the admiration that Owen had for Sassoon had swapped around and it was after his death that Sassoon greatly admired his poetry and published his poems. We can almost assume that without the meeting of the pair, Wilfred Owen would not be recognised today as a war hero. In conclusion, Wilfred Owens uses a lot pf poetic techniques especially the use of verbs and rhetorical questions to create imagery, which allows the audience to get a picture of the world war. These images have been aided by many paintings painted during or after the war, several of which portrayed Owens's views of the war. Many of his personal experiences and emotions he felt during the war were incorporated into his poems, not directly but through a specific subject and aspect of the war. He uses the poetic techniques to get his point across. He was against the war and was angered very much by the people who had no experience of war who said that going to war was a good thing, he uses his poems to openly attack those who did this. ?? ?? ?? ?? Prashant PATEL 10A 5th July 2007 G.C.S.E ENGLISH LITERATURE Post 1914 Poetry COURSEWORK ...read more.

The candidate here writes a very extensive coursework piece that is of good length and fair analytical depth. Some points are made very clearly, but many other sections are often led astray from the actual point or aren't precise enough, ...

The candidate here writes a very extensive coursework piece that is of good length and fair analytical depth. Some points are made very clearly, but many other sections are often led astray from the actual point or aren't precise enough, and do not clearly demonstrate a suitably A-Level analytical ability or ability to employ the correct analytical techniques to the poems. A lot of focus is dissipated on language, and how this "creates the horrors of war", where much more could be done to analyse structure (first mentioned very briefly and borderline irrelevantly here: "this gives the poem a very incoherent rhythm". There is definitely meaning behind the irregular and unconventional rhyme scheme and rhythm, so perhaps incoherent is the wrong word).

Errors like the above are repeated at various point throughout the essay, and whilst to an examiner these issues may seem minor and the real intentions of the analysis can be worked out however, some examiner may refrain from awarding marks as much as they would do if the analysis was written more clearly and with more care, and it is for this reason the candidate does not achieve top marks despite their extensive efforts. I figure this answer to be of quality enough that it could achieve a top B grade for A Level

The Level of Analysis is good here, but sometimes it is misplaced or ill-used, and there simply is not enough thought put into explaining the structure of the poem and how this reflects Owen's beliefs about war and the pity of war. I also recommend utilising a bit more of the context. Yes, there is a bountiful array of context with excellent reference to war artists and some other of Owen's war poetry (all of which shows the examiner the great amount of independent research carried out in order to help fortify this candidate's coursework) but these are rarely used in any other way than to, again, focus on language, but there are a great many more ways that Owen conveys his feelings and convictions about war. That isn't to say what is written here is not good - a lot of what is written earns points, but significantly less as the essay progress due to the uneven spread of analysis over the poetry. To counter this, I recommend a greater consideration of the structure of Owens poetry, how it varies from conventional structures, and also for the candidate to use more of a variety of context (e.g. for what reasons were the titles of 'Anthem of Doomed Youth' and 'Mental Cases' changed from 'Anthem for Dead Youth' and 'Purgatory Passions' respectively?).

The Quality of Written Communication varies throughout the answer. Sometimes the candidate writes clearly and precisely, incorporating a number of specialist terminologies in order to tackle the question. However, in some parts there are minor typing errors like "Wilfred Owens uses a lot pf poetic techniques especially the use of verbs and rhetorical questions to create imagery", which has an extra "s" on "Owen" and writes "pf" instead of "of". There is also a missing comma in this sentence. This many errors in a single sentences is simply not acceptable at A Level, and as such must be corrected before final deadlines are reached.