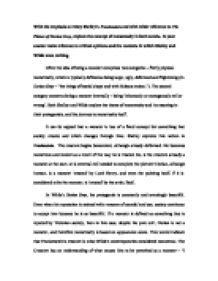 With the emphasis on Mary Shelleys Frankenstein and with wider reference to The Picture of Dorian Gray, explore the concept of monstrosity in both novels.

With the emphasis on Mary Shelley's Frankenstein and with wider reference to The Picture of Dorian Gray, explore the concept of monstrosity in both novels. In your answer make reference to critical opinions and the contexts in which Shelley and Wilde were writing. Often the idea of being a monster comprises two categories - firstly physical monstrosity, which is typically defined as being large, ugly, deformed and frightening (in Dorian Gray - "the things of b*****l shape and with hideous voices."). The second category concerns being a monster internally - being 'inhumanly or outrageously evil or wrong'. Both Shelley and Wilde explore the theme of monstrosity and its meaning in their protagonists, and the journey to monstrosity itself. It can be argued that a monster is less of a fixed concept but something that society creates and which changes through time. Shelley explores this notion in Frankenstein. The creature begins benevolent, although already deformed. He becomes monstrous and violent as a result of the way he is treated. So, is the creature already a monster at the start, or is external evil needed to complete the picture? Dorian, although human, is a monster 'created' by Lord Henry, and even the painting itself, if it is considered to be the monster, is 'created' by the artist, Basil. In Wilde's Dorian Gray, the protagonist is constantly and arrestingly beautiful. ...read more.

She hints that it is society itself that is the monster, not only for its rejection of the Creature, but for the injustice that Justine suffers. Society becomes the monster for rejecting the creature despite his good intentions, and this prejudice is spread across the classes (De Laceys being examples of upper class rejection). The superficial attitude towards beauty and reluctance to tolerate difference are characteristics that Shelley condemns; shown through the cries of the villagers upon seeing the Creature - "Wretched devil!" This attitude is displayed in Dorian Gray too, where society values external beauty higher than anything else. Bruce Austen interpreted Shelley's ideas in the novel to suggest that society creates the monster itself through rejection and judgment, but that the monsters that are created are ultimately the downfall of society. Frankenstein and his Creature could, then, represent relations between the bourgeoisie and the oppressed working class - one is created by the other and becomes resentful of its treatment. Wilde, too, uses the novel Dorian Gray as a vessel to portray ideas - initially idolising the hedonistic lifestyle in response to the austere morality of Victorian society. He presents Lord Henry as the typical charming and witty 'bad influence', which leads to the view that he is the true monster because he is the source of all the evil. He approves of many of the immoral things Dorian does, including leaving Sybil. ...read more.

This again highlights to the reader what he wants so much and yet can never achieve. It shows that the Creature considers beauty to be the barrier between monstrosity and normality. Sybil Vane is used for the same purposes in Dorian Gray - she is "a wonderful tragic figure" with "winsome fanciful ways and a shy, tremulous grace". Most importantly, she is innocent. These female characters become 'prey' for the monsters - Elizabeth is murdered, and Sybil is seduced, then ceases acting, and as a result, in Dorian's eyes, is spoiled. Rejected, she takes her own life. There is a final interpretation of the word 'monster' - etymologically, it means something to be shown, an example to demonstrate and to warn. Both Dorian and the Creature are examples that indulgence of desire, whether it be vengeful, physical or s****l is not a good way to live, and their punishment and remorse, as a result, promotes virtuous conduct. Society thus rejects the monsters because acceptance of them would condone their behaviour. In conclusion I would state that the 'monsters' in these novels are opposites - one physically beautiful but immoral, one hideous but moral and the attitudes towards them reflect this. Both authors use the 'monsters' to highlight the importance of beauty in society and our attitudes toward the different levels of it. They introduce ambiguity about the characters of Lord Henry and Victor to convey the moral that creating a monster is as bad as being one, and that their 'experiments' are misguided. ...read more.