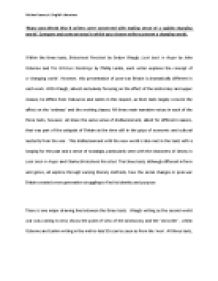 Within the three texts, Brideshead Revisited by Evelyn Waugh, Look back in Anger by John Osborne and The Whitsun Weddings by Phillip Larkin, each writer explores the concept of a changing world.

﻿Michael LasseyA2 English Literature ?Many post-World War II writers were concerned with making sense of a rapidly changing world?. Compare and contrast ways in which your chosen writers present a changing world. Within the three texts, Brideshead Revisited by Evelyn Waugh, Look back in Anger by John Osborne and The Whitsun Weddings by Phillip Larkin, each writer explores the concept of a ?changing world?. However, this presentation of post-war Britain is dramatically different in each work. With Waugh, almost exclusively focusing on the effect of the aristocracy and upper classes, he differs from Osbourne and Larkin in this respect, as their texts largely concern the affect on the ?ordinary? and the working classes. All three main narrative voices in each of the three texts, however, all share the same sense of disillusionment, albeit for different reasons, that was part of the zeitgeist of Britain at the time still in the grips of economic and cultural austerity from the war . This disillusionment with the new world is also met in the texts with a longing for the past and a sense of nostalgia, particularly seen with the characters of Jimmy in Look back in Anger and Charles Brideshead Revisited. The three texts, although different in form and genre, all explore through varying literary methods, how the social changes in post-war Britain created a new generation struggling to find its identity and purpose. There is one major drawing line between the three texts. Waugh writing as the second world war was coming to end, shows the point of view of the aristocracy and the ?old order? , whilst Osborne and Larkin writing in the mid-to-late 50s can be seen as from the ?new?. All three texts, however, share the same disdain for the ?brave new-not-very-much-thank you?[1], as Jimmy puts it in Look back in Anger. This disdain can be seen most clearly in Brideshead Revisited through the character of Lieutenant Hooper. ...read more.

This, also like in Look back in Anger is done, most significantly, through language but also through structure. At the beginning of the book, in the midst of the ?roaring twenties? sees a golden age for both Charles and the aristocratic world he is a part of. In Charles? days with Sebastian at Oxford, Waugh uses language to idolise, writing from the voice of Charles in the Second World War, the world he sees fading. Waugh describes some ?languid days at Brideshead? with Charles and Sebastian, with them being in an ?enchanted castle?[11] with the ?zest, the generous affections? of Charles being ?very near heaven?. The language chosen by Waugh in this particular section shows the idolisation of the time period as well as the relationship between Charles and Sebastian as paradise. This is shown especially words like ?languid? and the structure of the section, with long, descriptive sentences; it gives the reader a sense of the ?heaven? Charles speaks of. It is no coincidence then, that the steady deterioration of the relationships between Charles and Sebastian and other members of the Fylte family, especially Julia, throughout Brideshead Revisited, are also marked with the decline of the landed aristocracy and Waugh uses language again to present this theme to the reader. From the imagery used by Waugh earlier in the novel, towards the end of the novel the reader can see lots of negative imagery to mark the fading world. Waugh depicts the military as invading Brideshead with ?the age of Hooper?[12]. In the novel, Brideshead becomes a symbol to Charles of the splendour and beauty of the upper classes and it is being ruined by the military with them boarding up ?walls and fireplaces?[13] and throwing cigarettes in the fountain. Not only is the military shown as ruining the aesthetic beauty of Brideshead but Waugh is also using them as a wider metaphor to symbolise how the war is bringing an end to the world Charles has loved and admired. ...read more.

This can be seen both through the characters of Alison?s father, referred to as The Colonel and Jimmy. Set and written in the backdrop of the fall of the British empire both characters look back to Britain?s past glories to criticise the new world they live in. Osborne portrays The Colonel as a sympathetic character, aware he is of a different time but believing that ?the last day the sun shone?[22] was when he left his post in the empire in India. This is also seen with Jimmy where Osborne writes how ?the old Edwardian brigade do make their brief little world look pretty tempting?[23]. Although alien to a modern audience, this notion of the empire would have been very familiar to all watching when it was first performed in 1956. Brideshead Revisited, written in the style of a memoir, unlike both Look back in Anger and The Whitsun Weddings it has a sense of nostalgia running through every page. Charles and indeed Waugh cannot make sense of their ?changing world? as it is so at odds with the decadence and beauty that they both see in the old world. Finally, it is clear from examining these three texts that all three writers choose to present their changing worlds very differently. This is partly because, for one, Waugh was writing from the prospective of another world entirely, that of the landed aristocracy, but all the texts offer different ways in which people reacted to the huge social upheaval that occurred during the post-war years. With Osborne showing bringing to light a ?new generation? that were left embittered and disappointed from the false optimism that directly precluded the second world war, to Larkin who presents the changing world he lives in with an irony and asking questions to how society was affected by bigger questions such as death and futility in the time period, the writers choose to present the changing world they are a part of in a unique way, but that still holds similarities with each other. ...read more.

An excellent essay which deals with the onerous task of comparing three texts extremely well. Throughout there is evidence of an understanding of social and historical contexts. Extremely well written. Logically structured and accurate analysis of language. Critical voices are used which shows evidence of wider reading. Remains focused on question throughout. Excellent.