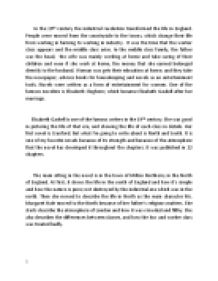 ﻿In the 19th century the industrial revolution transformed the life in England. People were moved from the countryside to the towns, which change their life from working in farming to working in industry. It was the time that the worker class appears and the middle class arise. In the middle class family, the father was the head, the wife was mainly working at home and take caring of their children and even if she work at home, the money that she earned belonged directly to the husband. Woman was gets their education at home, and they take the newspaper, advices books for housekeeping and novels as an entertainment tools. Novels were written as a form of entertainment for women. One of the famous novelists is Elizabeth Cleghorn; which became Elizabeth Gaskell after her marriage. Elizabeth Gaskell is one of the famous writers in the 19th century. She was good in picturing the life of that era, and showing the life of each class in details. ...read more.

But she was the good and the true heroine. It is like all the outer shape of the romances characters is obviously similar. Dictionary.com" defines a heroine as: ?a woman of distinguished courage or ability, admired for her brave deeds and noble qualities.? To be heroic is to be brave, intrepid, magnanimous, enterprising, illustrious for valor. The good heroine will have the greatest values to correct the mistakes in his society as he/she could. None of us want to read a book about a lovely angel as Elsie Dinsmore, for example. Margaret Hale is close to be perfect as far as that she ?always doing the right thing?. Margaret Hale wasn?t beautiful at first but at the end we the reader discover how she is really captivating. At first, she was lives in the lovely poetical place where everything is green and wide which can we say it is an innocent existence. Then she moved to the reality of the North, she was shucked, lost and empty at first she went there, and that appear when she say: 1. ...read more.

? The true women to Margaret Hale is appear when she says: 1. ?One of the first evidences of a real lady, is that she should be modest. By modesty we mean that she shall not say, do, nor wear anything that would cause her to appear gaudy, ill-bred, or unchaste. There should be nothing about her to attract unfavorable attention, nothing in her dress or manner that would give a man an excuse for vulgar comment. When we dress contrary to the rule of modesty we give excuse for unwholesome thoughts in the mind of those who look upon us, and every girl who oversteps these bounds makes herself liable to misunderstanding and insult, though she may be innocent of any such intention.? ,and that what she is really are from the beginning of the novel till the end. In Conclusion, Margaret Hale is an inspirational character of bravery, determination, and selflessness. She loses everything that she loves, yet she clings to her duty, to her faith in God, to hope. There are moments when she is filled with doubt and faithlessness, but Margaret perseveres to the very end. ...read more.