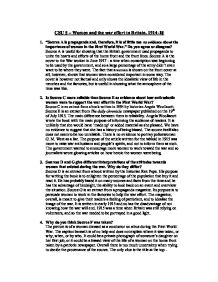 Women and the war effort in Britain, 1914-18 Sources Questions

CSU 5 - Women and the war effort in Britain, 1914-18 1. "Source A is propaganda and, therefore, it is of little use as evidence about the importance of women in the First World War." Do you agree or disagree? Source A is useful for showing that the British government used propaganda to unite the hearts and efforts of the home front and the front lines. Source A is the cover to the War worker in June 1917 - a time when conscription was beginning to be used by the government, and so a large percentage of the army didn't even want to be where they were. The fact that a woman is shown on the front cover at all, however, shows that women were considered important in some way. The cover is however not factual and only shows the idealistic view of life in the trenches and the factories, but is useful in showing what the atmosphere of the time was like. 2. Is Source C more reliable than Source E as evidence about how enthusiastic women were to support the war effort in the First World War? ...read more.

1915 was a time when Britain was still relying on volunteers, and so the war needed to be portrayed in a good light. 4. Why do you think Source F was taken? The picture is of a woman dressed as a conductor on a bus during the First World War. The caption beneath is of no help and does not explain where it was taken, or why, when, or by who. It could be a private photograph of someone's daughter on her first job, or it could be a biased view of the life of a woman on the home front taken by a patriotic newspaper. Overall there is too much uncertainty when trying to decide the provenance of the source. The only clue is the title at the top - "Doing a man's job". A title like that could reveal that the source possibly originated in a history textbook. 6. "War work proved to be a great leap forward for British women" Do sources A to G provide enough evidence to prove this interpretation to be true? I believe that the sources A to G do not provide enough evidence to prove this interpretation to be true. ...read more.

However, many women on the home front felt that they had achieved a great social step forward. Fashion changed - The pre-war long skirts were hired. Many women began to wear trousers and overalls to go to work in the factories and farms. Women could go out to lunches together and smoke in public. The suffragette movement had been fighting before the war and throughout the war and in February 1918 the government passed the Representation of the People Act that gave women who were over thirty and married the right to vote. These notes from video sources show that women did have a great step forward. But, after the war, many women went back to their old housewife lives when their husbands came home from fighting. Many modern sources show that there was a slow step forward for women during the war, but not as momentous as the propagandistic sources would have us believe. Most of the sources that praise women's involvement have an ulterior motive and are intentionally biased or subjective. One modern source (1965) does corroborate the sources written at the time, but it is the only one. Therefore I say that the sources do not prove that "war work proved to be a great leap forward for British women". ?? ?? ?? ?? ...read more.