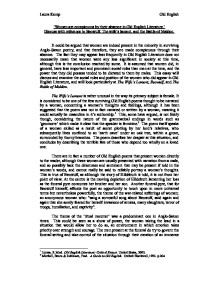 'Women are conspicuous by their absence in Old English Literature.' Discuss with reference to Beowulf, The wife's lament, and the Battle of Maldon.

'Women are conspicuous by their absence in Old English Literature.' Discuss with reference to Beowulf, The wife's lament, and the Battle of Maldon. It could be argued that women are indeed present in the minority in surviving Anglo-Saxon poetry, and that therefore, they are made conspicuous through their absence. The fact they may appear less frequently in Old English Literature does not necessarily mean that women were any less significant in society at this time, although this is the conclusion reached by some. It is assumed that women did, in general, have less important and prominent social roles than men at the time, and the power that they did possess tended to be dictated to them by males. This essay will discuss and examine the social roles and position of the women who did appear in Old English Literature, and will look particularly at The Wife's Lament, Beowulf, and The Battle of Maldon. The Wife's Lament is rather unusual in the way its primary subject is female. It is considered to be one of the few surviving Old English poems thought to be narrated by a woman, concerning a woman's thoughts and feelings, although it has been suggested that the poem was not in fact narrated or written by a woman, meaning it could actually be masculine in it's authorship.1 This, some have argued, is not ...read more.

independent and influential.5 This view was shared by Alexandra Hennessy Olsen, who argued against the view of women as passive figures in Beowulf.6 Critics of Beowulf have tended to minimize the presence and importance of women in the poem due to the prevailing theme of male heroism. When women do appear in Beowulf, they are described as 'attractively tragic and pathetic,' (Janet T. Buck).7 Beowulf, however, does not exclude women completely as is the case with some Old English Poetry. There are three main roles that the women in Beowulf seem to assume. These are hostess, peaceweaver, and ritual mourner. There are also two more recently identified ones of goader and counsellor. Although these roles were important, it was often 'a significant if subordinate' role that women played rather than one of great importance (Michael J.Enright).8 When examining specific females in Beowulf, it is possible to uncover some interesting findings. Grendel's mother, sometimes considered the exception to the general tradition of females appearing as passive characters, is significant, as she is de-valued and looked upon almost as an animal rather than a female figure. It has been said that Grendel's mother inverts the image of the Anglo-Saxon queen because she behaves in a heroic and masculine way.9 She also represents the politically active, therefore socially ostracised queens who were around in Anglo-Saxon times, exceptions to the idea of women as peacemakers. ...read more.

Not being able to gain heroic status through the traditional masculine ways, women were able to do so through the virtues of wisdom and chastity, which in themselves were considered heroic. In conclusion, it is possible to argue that although women were indeed absent in much of Old English Literature, they were not totally lacking, for example in Elene, Judith and Juliana and The Wife's Lament. They are important in their portrayal in Beowulf, which shows women in varying roles from the peacemaker character of the Queen to the powerful and almost masculine character of Grendel's mother. How women are portrayed in these literary works has been of great significance in discovering the roles of women in Anglo-Saxon society, and how these roles differed and changed according to how effectively the males fulfilled their societal obligations. It is possible to conclude that Anglo-Saxon society demanded passivity rather than heroism from its women, and the heroic masculinity was left predominantly to the males, as shown in The Battle of Maldon. It is possible to conclude that the absence of women in Old English literature does make them somewhat conspicuous, but this means that when they do appear, they become even more interesting to study, and provide us with valuable historical information about Anglo-Saxon society. ...read more.