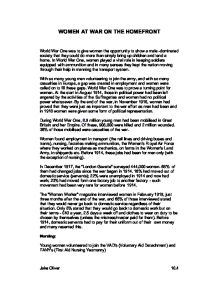 Women At War On the Homefront.

WOMEN AT WAR ON THE HOMEFRONT World War One was to give women the opportunity to show a male-dominated society that they could do more than simply bring up children and tend a home. In World War One, women played a vital role in keeping soldiers equipped with ammunition and in many senses they kept the nation moving through their help in manning the transport system. With so many young men volunteering to join the army, and with so many casualties in Europe, a gap was created in employment and women were called on to fill these gaps. World War One was to prove a turning point for women. At the start in August 1914, those in political power had been left angered by the activities of the Suffragettes and women had no political power whatsoever. By the end of the war, in November 1918, women had proved that they were just as important to the war effort as men had been and in 1918 women were given some form of political representation. During World War One, 8.9 million young men had been mobilised in Great Britain and her Empire. Of these, 908,000 were killed and 2 million wounded. 36% of those mobilised were casualties of the war. Women found employment in transport (the rail lines and driving buses and trams), nursing, factories making ammunition, the Women's Royal Air Force where they worked on planes as mechanics, on farms in the Women's Land Army, in shipyards etc. ...read more.

Regardless of parental opposition, the lady (Mrs. Warren) did join the VAD's. She dealt mostly with gunshot wounds and gas victims. Her main job was to keep wounds clean which meant constantly draining a man's wounds. She also found out that wounded soldiers would put dirty coins into the bandages and onto the wound if they felt that they were going to be returned to the frontline after they left hospital. The only forms of painkiller the VAD's had were aspirin and morphine which, in morphine's case, they had in tablet form. The tablet had to be mixed with water and then sucked into a needle before the VAD had to find a suitable place near the wound to inject it. VAD's did not get paid, as it was a voluntary appointment. Those that organised them, Sisters and Matrons, did. Because of this non-payment, VAD's usually came from a certain social background where not being paid was not a problem. Those who joined the FANY's had a less glamorous time. Antonia Gamwell remembers that as a FANY she had to drive an ambulance (in fact, a car belonging to her family), scrub out and disinfect rooms which housed wounded soldiers and on occasions was asked to get rid of bodies from the hospital she worked at. ...read more.

Factory Workers: Some of the most important done by women was in the ammunition factories. With the young men away fighting, this vital work was done by women. It was very dangerous. Working with explosive chemicals meant that one explosion in a factory could trigger off many other ones. Also the protective clothing of today did not really exist then. The munition girls worked with sulphur. There was no protection from this dangerous chemical and the women who worked with sulphur found that their exposed skin turned yellow as the chemical impregnated itself into any exposed skin. Therefore, your face and hands could take on a yellow tinge. These women were given the nick-name "canaries" - though it was not a term of abuse, more a nick-name of endearment as people recognised the massive importance of their job. Ironically when the war ended in November 1918, and the soldiers returned from Europe, these ladies were dismissed from their job and replaced by those men who had been serving soldiers. The evidence suggests that this did not cause resentment among the women as the soldiers had fought for their country. But all the work done by women during the war was to lead to something the Suffragettes had wanted but failed to get. In 1918, women over the age of 30 were given the right to vote and in 1928, this was changed so that all women had equal political rights with men. Jake Oliver 10.4 ...read more.