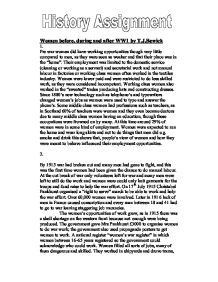 Women before, during and after WW1.

Women before, during and after WW1 by T.J.Bewick 1. Pre war women did have working opportunities though very little compared to men, as they were seen as weaker and that their place was in the "home". Their employment was limited to the domestic service (cleaning or working as a servant) and secretarial work and not manual labour in factories or working class women often worked in the textiles industry. Women were lower paid and were restricted to do less skilled work, as they were considered incompetent. Working class women also worked in the "sweated" trades producing hats and constructing dresses. Since 1880's new technology such as telephone's and typewriters changed women's jobs as women were used to type and answer the phone's. Some middle class women had professions such as teachers, as in Scotland 60% of teachers were women and they even became doctors due to many middle class women having an education, though these occupations were frowned on by many. ...read more.

The women's opportunities of work grew, as in 1915 there was a shell shortage on the western front because not enough were being produced. The government gave Mrs Pankhurst �3000 to organise women to do war work; the government also used propaganda posters to get women to work. A national register "women's war register" in which women between 16-65 years registered so the government could acknowledge who could work. Women filled all sorts of jobs, many of them dangerous and skilled. They worked in shipyards and drove trams, buses and ambulances. Women also built aeroplanes and airships. Farming the land 48,000 women worked on the land as part of the women's land army. Most of them had had experience in farming as on a farm, wives and children were expected to work without pay anyway. Munitions work was the occupation that most women were employed in, as in 1918 900,000 women were involved in munitions industry. ...read more.

But the war meant that they showed that women could do jobs that men did and unlike before the war women believed it was possible to eventually be able to work. The First World War brought about dramatic changes in the way women were viewed and how they viewed themselves. Pre war women were regarded as second class citizens by many; they were seen as weak compared to men. Some women protested (the suffragettes) to change the way men regarded them and for the right to vote. During the war women became increasingly important to the war effort due to the mass of volunteers of men and later conscription to the armed forces. By the end of the war the men came home and things took a backward step though some progress was made. In 1919 the government passed the " sex disqualification act, allowing women into a number of professions; barristers, solicitors, auctioneers, surveyors, architects, judges and serve on a jury which were forbidden for women to do before the war. Women now believed that they could and should be able to do what men do and were not second class citizens. . ...read more.