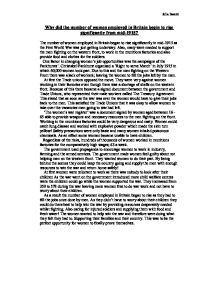 This satisfied the Trade Unions that it was okay to allow women to take over the vacancies men going to war had left. 'The women's war register' was a document signed by women aged between 16 - 65 able to provide weapons and necessary resources to the men fighting on the front. Working in the munitions factories could be very dangerous and nasty. Women could catch lung disease and worked with explosive powder which made the skin turn yellow! Safety precautions were only basic and many women inhaled poisonous chemicals. As an effect some women became unable to have children. Regardless of the risks, hundreds of thousands of women worked in munitions factories for the comparatively high wages; �3 a week. ...read more.

They increased from 350 to 578 during the war leaving more women free to do war work and not have to worry about their children. As a result the number of women employed in Britain began to rise as they had to fill the jobs once done by men. As they didn't have to worry about their children they could do there best to help win the war by providing resources desperately needed whilst fighting. Also caring for injured soldiers and supplying them with food and fresh water! The women wanted to help win the war and therefore were doing what they felt they had to. Supporting their families and their country. This was to be the perfect opportunity for women to finally prove themselves. info ?? ?? ?? ?? Julia Barnitt ...read more.