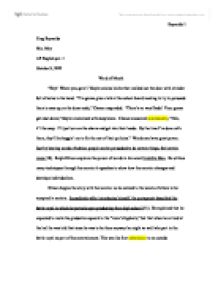 Greg Reynolds Mrs. May AP English per. 4 October 9, 2003 Word of Mouth "Hey! Where you goin'," Skyler said as his brother walked out the door with a binder full of notes in his hand. "I'm gonna give a talk at the school board meeting to try to persuade them to ease up on the dress code," Chance responded. "There's no way Dude! Your gonna get shut down," Skyler exclaimed with skepticism. Chance answered nonchalantly, "Nah, it'll be easy. I'll just turn on the charm and get into their heads. By the time I'm done with them, they'll be beggin' me to fix the rest of their policies." Words can have great power. Just by hearing words of advice, people can be persuaded to do certain things, feel certain ways (18). Ralph Ellison explores the power of words in his novel Invisible Man. He utilizes many techniques through the narrator's speeches to show how the narrator changes and develops individualism. ...read more.

During a dramatic scene, the invisible man ignored the commotion when he brought Mr. Norton to the Golden Day, a low-class bar full of psychiatric patients "gesticulating to themselves" and the scene of their violent insurrection. The scene itself had no effect on his evaluation of his actions. He began to realize that he must think for himself only after he was expelled for poor decision-making; he ignored the fact that he almost got Mr. Norton killed during the bar fight when considering his actions (19). A few months after his expulsion, the narrator witnessed the eviction of an elderly black couple from a tenement in Harlem, and his involvement began to play a role in his progression toward individualism. While looking at their possessions "piled in a jumble" on the sidewalk, he recognized that he and they share a culture and that they were being robbed of that culture and history (10). This knowledge alone, however, was not enough to draw him to action. ...read more.

Jack stated that the invisible man was "not hired to speak," and as such he should conform to the directives of the Brotherhood. This was in direct response to the invisible man's first act of individualism in years: the organization of a rally in response to Tod Clifton's death. "If he'd been white, he'd be alive"(469). Here, again, the invisible man did not act until provoked. The protagonist's individualism culminated during the race riot in the last chapter of the book. "I had no longer to run for or from the Jacks and the Emersons and the Bledsoes and Nortons"(559). While observing the frenzied mob that had taken to the streets of Harlem, he finally made the realization that it was "better to live out one's own absurdity than do die for that of others" (559). This ultimate realization, like all his other steps toward individualism, came only after acting upon the events of chaos. In the novel Invisible Man, the narrator's orations underline the ways in which his character developed and individualized. His realizations ultimately lead the protagonist to the belief that he must think for himself and by himself. Reynolds 1 ...read more.