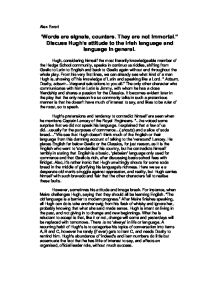 'Words are signals, counters. They are not immortal.&quot; Discuss Hugh's attitude to the Irish language and language in general.

Alex Ezrati 'Words are signals, counters. They are not immortal." Discuss Hugh's attitude to the Irish language and language in general. Hugh, considering himself the most literarily knowledgeable member of the Hedge School community, speaks in continuous riddles, shifting from Gaelic to Latin to English and back to Gaelic again without end throughout the whole play. From his very first lines, we can already see what kind of a man Hugh is, showing off his knowledge of Latin and speaking like a Lord. "Adsum, Doalty, adsum...Vesperal salutations to you all." The only other character who communicates with him in Latin is Jimmy, with whom he has a close friendship and shares a passion for the Classics. It becomes evident later in the play that the only reason he so commonly talks in such a pretentious manner is that he doesn't have much of interest to say, and likes to be ruler of the roost, so to speak. ...read more.

There is no 'always' in life or language. A recurring habit of Hugh's is to categorise his topics of conversation into items A, B and C, however he rarely (if ever) gets to item C, and needs Doalty to remind him. Hugh's abundance of 'indeed's and item numbers do little but accentuate the fact that he has little of interest to say, and affects an organised, official leader role, without much success. Upon meeting Lieutenant Yolland, Hugh acts coldly and talks to him as an inferior because of his language. However he is pompous to such an extent that he makes himself out to be a bit of an idiot at times, for instance when George mentions William Wordsworth, and Hugh cockily replies, "...we're not familiar with your literature...We tend to overlook your island." It is true that the Irish may have felt closer to Southern Europe due to existing trading links, but to speak about a great empire and also a great poet as if they were far inferior to him just proves his stupidity and total ignorance. ...read more.

"...words are...not immortal. And it can happen...that a civilisation can be imprisoned in a linguistic contour which no longer matches the landscape of...fact." This is one of the rare times when Hugh regains some intelligence, and quite astutely realises what's going on. He is basically, surprisingly saying that Yolland had better not get too comfortable and involved with the Gaelic language because its end is sure to come. It seems that Hugh is not as ignorant as he normally seems, but that his non-stop drinking helps to take his mind off the fact that the past cannot live on forever. Because of his gradual realisation, at the end of the play Hugh completely gives up his uphill struggle of retaining the past, and realises that he must teach and become accustomed to all the new English place names if he is to have an identity at all. "We must learn where we live. We must learn to make them our own. We must make them our new home." In conclusion, Hugh never learned to live with changes and new beginnings until it was too late. ...read more.