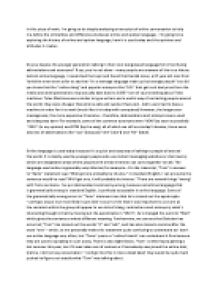 work, Im going to be deeply analysing a transcript of online conversation to help me define the similarities and differences between online and spoken language

﻿In this piece of work, I?m going to be deeply analysing a transcript of online conversation to help me define the similarities and differences between online and spoken language. I?m going to be exploring the history of online and spoken language, how it is used today and the opinions and attitudes it creates. Do you despise the younger generation talking in their own slang-based language full of confusing abbreviations and acronyms? If yes, you?re not alone - many people are unaware of the true history behind online language, I researched the topic and found that Gerald Jones, a 47 year old man from Yorkshire even went as far to say that ?it?s a teenage language made up by teenage people? but did you know that the ?online slang? and popular acronyms like ?LOL? that get such bad press from the media and older generations may actually date back to 1935? I am of course talking about Telex machines. Telex Machines were similar to type writers and a useful way of contacting people around the world, they were cheaper than phone calls and quicker than post - both users had to have a machine in order for it to work (much like it is today with computers) ...read more.

entice your audience and capture their attention - a speaker has significantly more control over what the listener will hear than the writer has over what the reader will read. For these techniques to be effective, however, the speaker needs to make sure that he or she has the audience's attention--audiences do not have the luxury of re-reading the words spoken. The speaker, therefore, must become a reader of the audience. Personally, I believe that the most significant difference between online language and spoken language is the way we can and can?t pick up an accent, you can however pick up a different language. In the transcript,, one of the online participants, ?Sam_90? starts speaking German in line 25 ? I can only assume that he speaks both English and German because his other three comments are all written in English. It is interesting how the other online ?speakers? react to ?Sam_90?s? German comment, instead of putting in any effort, and asking ?Sam_90? what he just said, or even Google translating it, they all seem to ignore the comment, and in line 26, ?sam? replies with a confused ?eh?. I presume ?Sam_90? realised his German comments wouldn?t be received well, as his next comment is back in English again. ...read more.

The opinions and attitudes that online and spoken language create are very interesting. If you showed the example transcript to a group of older generation upper class people; it is fair to assume that they would think these people weren?t very intelligent because of their lack of standard English, whereas the reality might be that they are in fact incredibly clever but just like using abbreviations and contractions online because it saves time. Incidentally people?s attitudes to spoken language tend to vary; just from the way an individual speaks we can often tell what kind of person they are, or would like to be. In conclusion, there are many differences and similarities between spoken and online language. They both have their advantages and disadvantages but in my opinion they are both as useful and fascinating as each other. Technology has developed a lot over the years and so has our use of language. Of course, we still use lots of words from our previous generations, but new words are being invented all the time. I do however think that online language has a bad reputation for influencing the younger generations use of standard English and spelling that in my personal opinion is unnecessary. I have tried to deeply analyse the transcript to help me get my points across and I hope I have done so effectively. mnkj ...read more.