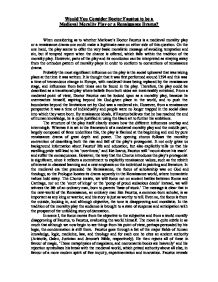 Would You Consider Doctor Faustus to be a Medieval Morality Play or a Renaissance Drama?

Would You Consider Doctor Faustus to be a Medieval Morality Play or a Renaissance Drama? When considering as to whether Marlowe's Doctor Faustus is a medieval morality play or a renaissance drama one could make a legitimate case on either side of this question. On the one hand, the play seems to offer the very basic moralistic message of avoiding temptation and sin, but if tempted repent when the chance is offered, which falls within the tradition of the morality play. However, parts of the play and its conclusion can be interpreted as straying away from the orthodox pattern of morality plays in order to conform to conventions of renaissance drama. Probably the most significant influence on the play is the social upheaval that was taking place at the time it was written. It is thought that it was first performed around 1594 and this was a time of tremendous change in Europe, with medieval times being replaced by the renaissance stage, and influences from both times can be found in the play. Therefore, the play could be described as a transitional play where beliefs from both sides are inextricably entwined. From a medieval point of view, Doctor Faustus can be looked upon as a morality play, because he overreaches himself, aspiring beyond his God-given place in the world, and to push the boundaries beyond the limitations set by God was a medieval sin. ...read more.

However, even as he seals the bargain that promises his soul to h**l, Faustus is repeatedly filled with misgivings, which are bluntly symbolised in the verbal duels between the good and evil spirits and the play now turns from renaissance drama back to medieval morality. Faustus is a man caught between two conflicting traditions, trapped between medieval morality and renaissance individuality. The evil spirit presents the views of a changing society where the potential of self is explored and in this case, at whatever cost. The good spirit is the representative of God's truth and re-introduces the atmosphere of the morality play by constantly putting forward the possibility of repentance, but because of his deep conviction that he is already damned, Faustus believes that things cannot get any worse. This shows that Faustus is in despair and according to traditional Christian morality despair is, paradoxically, a form of pride, 'Faustus shall not repent.' The moralistic message is clear, it is not Faustus' actions that d**n him, but his pride and all the other sins that he commits are different aspects of this. At this point, with the appearance of Lucifer Faustus now ceases to be a renaissance free agent and becomes a subject of the devil, because in the presence of Lucifer there is no possibility of the free debate of the intellect. ...read more.

Typical morality features in Doctor Faustus are the good and bad angels, the tempters in the form of Valdes and Cornelius, the seven deadly sins and the old man in the last act, who offers Faustus a chance of repentance. Also typical are the comic scenes in the middle of the play. However, in a traditional drama, or tragedy, a hero, and in this case a hero of the renaissance, is brought down by an error or a series of errors and only realises his mistake when it is too late. In Christianity, though, as long as a person is alive, there is always the possibility of repentance, so if a tragic hero realises his mistake in time, he may still be saved, but this is not so with Faustus. In the final, wrenching scene of the play, Faustus does come to his senses and begs for a chance to repent, but it is too late and he is carried off to h**l. This would suggest that Marlowe sacrifices the medieval morality tradition, that it is never too late to repent, in order to increase the dramatic power of his finale, in which Faustus is conscious of his damnation and yet can do nothing about it. This leads to the conclusion that the play is neither purely in the category of medieval morality nor solely renaissance drama and can only be described as an inverted morality play or even perhaps a transitional play, taking its influences from both schools of thought. ...read more.