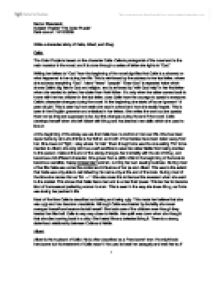 Write a character study of Celie, Albert, and Shug.

Write a character study of Celie, Albert, and Shug. Celie: The Color Purple is based on the character Celie. Celie is protagonist of the novel and is the main narrator in the novel, and it is done through a series of letter she rights to "God". Writing her letters to "God" from the beginning of the novel signifies that Celie is a shamed on what happened to her during her life. This is reinforced by the address to her last letter, where she address everything "God", "stars" "trees" "people". "Dear God" is repeated twice which shows Celie's big fate in God and religion, and is enforced by "with God help" in her first letter when she wanted to defend her sister from their father. It is only when her sister comes back to home with her two children in the last letter, does Celie have the courage to speak to everyone. Celie's character changes during the novel. At the beginning she starts off as an ignorant 14 year old girl. This is seen by how week she was in school and how she easily forgets. This is seen in her English grammar and mistakes in her letters. She writes the word as she speaks them not as they are supposed to be, but this changes during the end if the novel. ...read more.

He might look handsome but his treatment of Celie wasn't. He used to beat her savagely and treat her as if she was his slave. He is known to Celie as "Mr. -" until her final letter where she manages to call him "Albert". Albert was also controlled by someone else. His father decides what Albert does and even chooses his first wife. This is what puts off Shug from marrying Albert, as she wanted a man that could control his own life. Albert changes twice during the novel. During the majority of the book we see Albert as a cruel person, his only concern is his own pleasure and to marry Shug Avery. We see him as mercy less, when he used to hide Nettie's letters from Celie, and thus separating the two sisters. Both sisters thought the other dead or in a very bad state because no one replied to the other's letters. He used to beat Celie for anything and she explains it, and he proves it that he beats her because she is not like Shug. This shows that Albert does not care for individual personalities and wants everything the way he wants it. But Shug describes a deferent side of Albert. In her account she told to Celie, Albert was a completely different person. ...read more.

That's one of the reasons that Celie loves Shug tenderly and describes her as "the most beautiful woman I ever saw" Shug has an individual character. She in not controlled by anyone, and is able to judge and to choose for herself. In Celie's life Shug and Nettie are the closest to her. Shug helps Celie whenever she is in need, because she has a gentle heart and an open one. She never left her even though she was on the other side of the country. She never left her alone and was Celie only companion. They become very close that they end up making love together, when Albert and Grady where out of the house drinking. Although Shug is very close to Celie she is sometime cruel to others. She admits this when she tells Celie how she was "so mean, and so wild" to Aunt Julie, Albert's first wife. We should note that she was very cruel too, with Albert and Celie when she first came to her house, during the period she was sick. She loves Albert because he is so "funny". She also loves men with passion, as she often says. Shug sometimes acts masculine, and Celie observes that she "often speaks like man". In that period of history Shug's behavior was unacceptable and was the complete opposite of the other woman in the book such as Celie and Sofia. ?? ?? ?? ?? 3 Name: Elsedeeck Subject: English "The Color Purple" Date due on: 16/10/2008 1 ...read more.