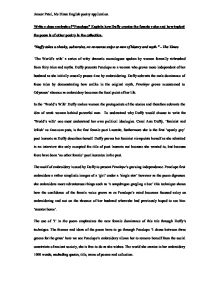 Write a close analysis of Penelope Explain how Duffy creates the female voice and how typical the poem is of other poetry in the collection.

Write a close analysis of "Penelope" Explain how Duffy creates the female voice and how typical the poem is of other poetry in the collection. "Duffy takes a cheeky, subversive, no nonsense swipe at men of history and myth." - The Times 'The World's wife' a series of witty dramatic monologues spoken by women formally airbrushed from fairy tales and myths. Duffy presents Penelope as a woman who grows more independent of her husband as she initially casually passes time by embroidering. Duffy subverts the male dominance of these tales by demonstrating how unlike in the original myth, Penelope grows accustomed to Odysseus' absence as embroidery becomes the focal point of her life. In the 'World's Wife' Duffy makes women the protagonists of the stories and therefore subverts the idea of weak women behind powerful men. To understand why Duffy would choose to write the 'World's wife' one must understand her own political ideologies. Carol Ann Duffy, 'feminist and leftish' as time.com puts, is the first female poet Laurette, furthermore she is the first 'openly gay' poet laureate as Duffy describes herself. Duffy proves her feminist viewpoints herself as she admitted in an interview she only accepted the title of poet laureate not because she wanted to, but because there have been 'no other female' poet laureates in the past. ...read more.

As Penelope becomes more engrossed in her embroidery her view on reality widens, her life is depicted in her embroidery as she describes her 'thimble' using the simile, like an 'acorn pushing up from the soil'. This symbolizes how embroidery has become her rebirth and new found voice of independence from her husband. More over, Duffy uses enjambment 'I sorted cloth, and scissors, needle. thread Thinking to amuse myself' throughout the poem in order to convey how embroidery has taken over Penelope's life, the enjambment imitates the movement of the needle and therefore illustrates to the reader how embroidery seamlessly takes over Penelope's life like it does in the poem. Duffy uses imagery to give meaning to the female voice; colours show how Penelope felt during times of her life, Penelope recalls her childhood 'at first I sewed a girl under a single star - cross stitch, silver silk' the assonance used here illustrates the innocence and beauty of a young Penelope. While waiting for her husband's return she tries to capture its unfulfilled quality through the image of 'running after childhood's bouncing ball' here she uses bright colours such as pinks and greens to show the hopefulness of youth, however she also depicts a disappointing image by adding 'Grey threads and brown', the change from 'silver' to 'grey' emphasizes Penelope's disappointment, she is ...read more.

While the poem does not contain a specific rhyming scheme, Duffy does use rhyming and half rhyming strewn throughout the poem, the effect of this is to again help show the seamless change of events in Penelope's life, this said, when Penelope's voice is at its strongest towards the last two stanzas Duffy removes any rhymes. Here the feminist in Duffy could be demonstrating that like Penelope does not need her husband, she herself does not need to fall back on the male invented technique of a rhyme to make her poem a success. Overall, Duffy creates the female voice in Penelope by allowing it to grow in strength and independence through satirizing the stereotype of embroidery being associated with the weakness of women and instead making it symbolize strength and independence. As a result the female voice can be heard aloud throughout the poem. Through techniques that mirror this, Duffy successfully gives the women in the original tales the power to be heard, this is what I believe it the quintessential idea behind 'The World's Wife', giving the women in literature an output to voice their opinions. Ameer Patel, Ms Dinsa English poetry application. 1000 words; excluding quotes, title, name of poems and collection. ...read more.