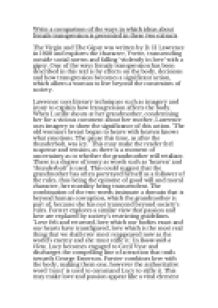 Write a comparison of the ways in which ideas about female transgression is presented in these two extracts from &quot;The Virgin and the Gypsy&quot; and &quot;The Lady of Shalott&quot;.

﻿Write a comparison of the ways in which ideas about female transgression is presented in these two extracts The Virgin and The Gipsy was written by D. H Lawrence in 1930 and explores the character, Yvette, transcending outside social norms and falling ?violently in love? with a gipsy. One of the ways female transgression has been described in this text is by effects on the body, decisions and how transgression becomes a significant action, which allows a woman to live beyond the constraints of society. Lawrence uses literary techniques such as imagery and irony to explain how transgression affects the body. When Lucille shouts at her grandmother, condemning her for a vicious comment about her mother, Lawrence uses imagery to show the significance of this action. ?The old woman?s breast began to heave with heaven knows what emotions. The pause this time, as after the thunderbolt, was icy.? This may make the reader feel suspense and tension, as there is a moment of uncertainty as to whether the grandmother will retaliate. ...read more.

However, Yvette?s want to ?fall violently in love? displaces the idea of calamitous consequences. This can also be seen in the Lady of Shalott by Tennyson. The Lady of Shalott ?in her web delights To weave the mirror?s magic sights, For often thro? the silent nights, A funeral, with plumes and lights.? The imagery and the metaphor of the word ?web? implies that the Lady of Shalott is trapped by society?s grip, trapping her into a sphere where ?she lives with little joy or fear.? A feminist perspective might suggest that this is the consequence of a patriarchal society, as men dominate women in many areas of life and thus eradicate their emotions, forcing them to live with detachment and numbness. The use of the word ?funeral? could be foreshadowing, suggesting the consequence of society?s constraints lead to a woman?s death, emotionally, mentally and physically. However, unlike the Lady of Shalott, Lucy does not suffer such extreme consequences when she transcends. ...read more.

The triadic structure may make the reader feel perplexed as well as the characters, allowing them to empathise with Lucy. But it also suggests that society is confused as well, creating rules of disapproval, which leads to hypocrisy as even antagonists such as the grandmother and Aunt Cissie appear to transcend beyond. To conclude, transgression is an important action that allows a woman to become liberated. While there may be consequences, such as Yvette being the subject of Aunt Cissie?s and granny?s fury, this character moves beyond the social constraints in order to become a liberated woman. This could be compared with the Lady of Shalott. The symbolism of her escape is magnanimous and underlines the extent to which she transcends. The quickening pace of the poem, which is the result of Tennyson adjusting from an iambic to trochaic tetrameter, crystalises her transcendence. While her death is tragic, it could also be seen as her liberation from a straightjacket, patriarchal society that tries to prevent her action of surpassing society. ...read more.