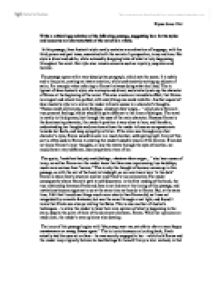 Write a critical appreciation of the following passage, suggesting how far its styles and concerns are characteristic of the novel as a whole.

Write a critical appreciation of the following passage, suggesting how far its styles and concerns are characteristic of the novel as a whole. In this passage, Jane Austen's style mostly contains a combination of language, with the third person and past tense, associated with the narrator's perspective, irony and tone. Her style is direct and subtle, while noticeably dropping hints of what is truly happening, throughout the novel. Her style also reveals concerns such as mystery, suspicion and humour. The passage opens with a very descriptive paragraph, which sets the scene. It is subtle and to the point, creating an instant emotion, while unobtrusively setting up objects of satire. For example when referring to Emma's always doing what she liked. This is typical of Jane Austen's style; she is simple and direct, and similarly sets up the character of Emma at the beginning of the novel. This also creates an immediate effect; that Emma is arrogant and almost too perfect, with everything one could wish for. Another aspect of Jane Austen's style is to allow the reader intimate access to a character's thoughts, "Emma could not but pity such feelings, whatever their origin..." ...read more.

how 'in the dark' Emma is about Jane's situation and her and Frank's true connection.The reader consequently shares Emma's path to self-discovery; in the first reading of the book, the true relationship between Frank and Jane is not known at the timing of this passage, and revalations become apparent to us at the same time as they do to Emma. But, at the same time, I felt that I could see things much more clearly than Emma did, as I was not misguided by romantic fantasies, but saw the novel through a real light, and found it ironic that Frank was always visiting the Bates. This is also another of Austen's techniques - to allow the reader to have their own opinion of what is happening in the story, despite the point of view of the dominant character, Emma. While her opinions are made clear, the reader's own opinions also develop. The irony of this passage begins with "the young man was yet able to shew a most happy countenance on seeing Emma again." ...read more.

Part of the author's style is to voice her own opinions, but not to impact on the overall feelings of Emma. The use of direct and indirect conversation diverges according to how much the reader needs to be involved in the immediate material. There is little dialogue in this passage, and it is indirect, which puts more distance between the reader and the material, allowing own opinions and suspicions to arise, and at times a better satirical view. In conclusion, this passage uses a range of techniques, such as irony, subtle tone which does not distract from the views and thoughts of the main character, laying out a direct description to set a scene, and directly accessing the dominant character's thoughts. These things are all needed not only for the reader to make their own views and suspicions in the course of the novel, but delving into Emma's true thoughts also allow the reader to understand her fully, and understand and accept her behaviour. Style techniques such as irony also set up concerns such as mystery and suspicion. Elysse Jones 13cl ...read more.