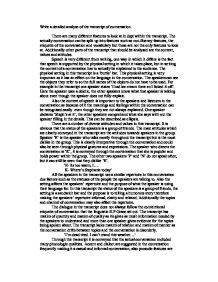 Write a detailed analyse of the transcript of conversation.

Write a detailed analyse of the transcript of conversation. There are many different features to look at in dept within the transcript. The actually conversation can be split up into features such as non-fluency features, the etiquette of the conversation and vocabulary but these are not the only features to look at. Additionally other parts of the transcript that should be analysed are the context, values and attitudes. Speech is very different from writing, one way in which it differs is the fact that speech is supported by the physical setting in which it takes place, but in writing the context of a conversation has to actually be explained to the audience. The physical setting in this transcript is a 'buttie' bar. This physical setting is very important as it has an effect on the language in the conversation. The speakers can see the objects they refer to so the full names of the objects do not have to be used. ...read more.

Speaker 'E' is the speaker who talks mostly throughout the transcript but is the most dislike in the group. This is clearly interpretive through the conversation and could also be seen through physical gestures and expressions. The speaker who directs the conversation is 'K', it is conveyed through the conversation that she is popular and holds power within the group. The other two speakers 'P' and 'N' do not speak often, but it can still be seen that they dislike 'E'. 'E- Its too warm, I.... K- Where's Stephanie today' All the speakers in the transcript use a similar repertoire in this conversation due factors such as the statuses of the people the speakers are talking to. Also the setting affects the speakers' repertoire and the purpose of what the speaker is using their language for. In this transcript the status of the speakers is a group of friends, the setting is a sandwich bar and the purpose is to telling a humorous story therefore making the speakers' repertoire informal, chatty and relaxed. ...read more.

This transcript holds the normal conventions of speech in both grammar and the vocabulary. Dissimilar to writing definite sentences are absent in the conversation. The speakers use lots of fillers and pause often, they speak in utterances creating a loose sentence structure. The noun groups are simple and there is a general use of contractions and assimilations in the conversation. 'It's too warm, I...' '...cement or summat' 'I didn't see anyone...' '...cause of you' 'I'm gonna kill Nicky.' The vocabulary tended to be very informal and limited. Both prop words and fillers were used by the group of speakers and extensive use of colloquialisms. Additionally as I have already mentioned ellipsis has been used. '...or summat.' 'Listen right...' '...near this sandpit, right.' 'I'm dead tired' 'I'm knackered me...' 'Yeah, callin everyone.' '...f*****g chucked out.' 'I'm gonna kill Nicky.' In conclusion, this transcript falls to all the conventions of normal speech. It takes place in context, the speakers each having their own attitudes. It is an informal and comfortable conversation between a group of friends which takes many diverse paths towards different topics. ...read more.

Accurate use of linguistic terminology but at times the quotes used are not specific enough to highlight these features. Some repetition of words,phrases and ideas. The writer clearly understands the features that occur in spontaneous speech. Some lapses in expression cloud meaning in places.