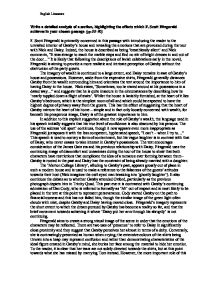 Write a detailed analysis of a section, highlighting the effects which F. Scott Fitzgerald achieves in your chosen passage (pp.88-90)

Write a detailed analysis of a section, highlighting the effects which F. Scott Fitzgerald achieves in your chosen passage (pp.88-90) F. Scott Fitzgerald is primarily concerned in this passage with introducing the reader to the unvisited interior of Gatsby's house and revealing the emotions that are provoked during the tour with Nick and Daisy. Indeed, the house is described as being 'breathlessly silent' and Nick comments, "It was strange to reach the marble steps and find no stir of bright dresses in and out of the door..." It is likely that following the descriptions of lavish celebrations early in the novel, Fitzgerald is aiming to provide a more realistic and intricate perception of Gatsby without the obstruction of the party guests. The imagery of wealth is continued to a large extent, and Daisy remains in awe of Gatsby's house and possessions. However, aside from the expensive shirts, Fitzgerald generally distances Gatsby from the wealth surrounding him and orientates the text around the importance to him of having Daisy in the house. ...read more.

The text encourages consideration of the James Gatz era and his previous relationship with Daisy. Fitzgerald uses the continuing image of discomfort and uneasiness during the tour of the house to show that both characters have restrictions that complicate the idea of a romance ever forming between them - Gatsby is rooted in the past and Daisy has the constraint of being already married with a daughter. The 'Merton College Library', alluding to Gatsby's past, appears grossly out of place in such a modern house and is used to make a reference to the falseness of the guests' attitudes towards their host (Nick imagines the owl-eyed man breaking into 'ghostly laughter'). It also continues the debate as to whether Gatsby attended Oxford, particularly as the previous photograph depicts him in Trinity Quad. This past event is contrasted with Gatsby's continuing admiration of Dan Cody, who is referred to formally as 'Mr' out of respect and is most likely to be placed in the text at this point to represent perseverance. ...read more.

However, the more important role of this image is to separate and contrast this character who appears so differently in reality with the ideal partner created in Gatsby's mind - he has longed for the past to return, but it will never fully happen, and thus Fitzgerald also contrasts Gatsby and Daisy themselves. Gatsby is blinded to complications, but Daisy's character has the ability of realisation. Finally, the happiness eventually achieved in this extract is quickly juxtaposed with Gatsby's irritability on the telephone, arousing further suspicion that his wealth may be attributed to bootlegging. Gatsby is quoted as saying, "I can't talk now, old sport..." which highlights that he is unwilling for Daisy to know of the subject matter and it abruptly breaks the calmness that is being experienced. It continues a similar theme to the rest of the extract, where Fitzgerald seeks to illustrate to the reader a clear definition between Gatsby's idealistic, but unrealistic mind and the triumph of inevitable reality. It is maintained that the characters presented are not without faults; whereas Gatsby longs for the past, Fitzgerald's writing explains that his dream is unachievable and that his love is, contrary to his beliefs, for an ideal. English Literature ...read more.