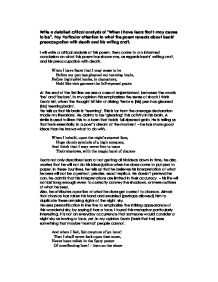 Write a detailed critical analysis of &amp;#147;When I have fears that I may cease to be&amp;#148;. Pay Particular attention to what the poem reveals about Keats' preoccupation with death and his writing craft.

Write a detailed critical analysis of "When I have fears that I may cease to be". Pay Particular attention to what the poem reveals about Keats' preoccupation with death and his writing craft. I will write a critical analysis of this poem, then come to an informed conclusion on what this poem has shown me, as regards keats' writing craft, and his preoccupation with death. When I have fears that I may cease to be Before my pen has gleaned my teeming brain, Before high-pil�d books, in charactery, Hold like rich garners the full-ripened grain; At the end of the first line we see a case of enjambment, between the words 'be' and 'before'. In my opinion this emphasizes the sense of shock I think Keats felt, when the thought hit him of dieing 'Before [his] pen has gleaned [his] teeming brain'. He tells us that his brain is 'teeming'. This is far from the average declaration made my literarians. ...read more.

And when I feel, fair creature of an hour! That I shall never look upon thee more, Never have relish in the faery power Of unreflecting love! - then on the shore Here Keats is believed to be talking about a beautiful woman he met once in Vauxhall Gardens. Seeing her, to Keats, is one of life's great moments. She has been given supernatural qualities, 'Faery power' - i.e., she is set apart from other women. I think Keats' deliberately describes her as little as possible. All through the poem he has been telling us, he sees such utter beauty in the world, yet is incapable of describing it to its fullest. It appears to be the case with this minute description of a lady he probably felt an attraction to. Also, faeries are mysterious, mischievous creatures in themselves - he perhaps finds this appealing of her and wants to maintain this, not delving too much into detail about her. ...read more.

In my opinion it would be fair to say that he felt loneliness, one that could only be remedied by the love of a partner. Woodhouse noted, 'He [Keats] has repeatedly said...that he never sits down to write, unless he is full of ideas - and then thoughts come about him in troops...one of his maxims is that if P[oetry] does not come naturally, it had better not come at all.' It can be taken from this, combined with Keats' own comment that his brain is teeming with ideas, that perhaps his preoccupations have given him too much to write about, that it has shaken his confidence in his own abilities. My final conclusion is that Keats' preoccupations have had an extremely adverse affect on his writing craft - his self-admitted incapability to accurately convey these scenes, or images that he beholds, has cause the worst frustration, and in turn, a 'stand-offish' approach to his poetry, like he is cautious of writing in case he has created an imperfect poem that would be an injustice to the particular source of his inspiration. ...read more.