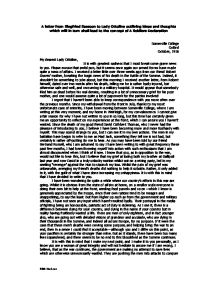 A letter from Siegfried Sassoon to Lady Ottoline outlining ideas and thoughts which will in turn shall lead to the concept of A Soldiers Declaration Somerville College Oxford October, 1916 My dearest Lady Ottoline, It is with greatest sadness that I must break some grave news to you. Please excuse that awful pun, but it seems once again our armed forces have made quite a mess of affairs. I received a letter little over three weeks ago from our friend Robert Graves' mother, breaking the tragic news of his death in the Battle of the Somme. Indeed, it shouldn't be something to joke about, but this morning I received another letter, from Robert himself, dated over two weeks after his death, telling me he is rather badly injured, but otherwise safe and well, and recovering in a military hospital. It would appear that somebody filed him as dead before his real demise, resulting in a lot of unnecessary grief for his poor mother, and one would assume quite a lot of paperwork for the parties involved! ...read more.

Whilst the pain of my grief was unbearable, avenging my friend's deaths did nothing to help it subside. Rather, it only added to it, with the guilt of what I have done increasing my unhappiness. It is with this in mind that I have decided to write to you. I have been wondering for quite a while where our country's efforts in this war are going. Whilst it is obvious from the state of affairs at home, on a smaller scale everyone is doing their own bit to help at the front, sending food parcels and so on - which I know is genuinely appreciated by the troops, since their own rations tend to be meagre and unappetising, to say the least. But from higher up such as from the government and military officials, I have not seen any input which hasn't resulted badly. Their portrayal in the media of fighting being an honourable, patriotic act of duty is sickening. As I see it, there is a difference between dying for your country, and dying in the name of your country but in reality having fruitlessly wasted a life. ...read more.

Surely the government should put life as a priority in this war, rather than this prolongation of what I can only describe as hell - and yet there seems to be no end to the warfare or the death or the suffering of the young men as they see horrors which no man should ever have to bear witness to. I hope, as I have divulged my thoughts to you, that you may offer me some of your own thoughts on the matter. We differ in our opinions of the war, that much is true, but I feel that this is a concern that we can relate on, I would hope on multiple levels. Any light you could shed on the matter, or whether I am simply going up a dead end, would be greatly helpful to me - as I am considering writing a paper or essay of some sort on this subject to present to someone who could perhaps use it as a means to prevent the prolongation of the war. Your grateful and lasting friend, Siegfried Edith MacLean ...read more.