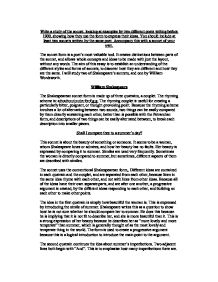 Write a study of the sonnet, looking at examples by two different poets writing before 1900, showing how they use the form to express their ideas. You should include at least two sonnets written by the same poet. Accompany this with a sonnet of your own.

Write a study of the sonnet, looking at examples by two different poets writing before 1900, showing how they use the form to express their ideas. You should include at least two sonnets written by the same poet. Accompany this with a sonnet of your own. The sonnet form is a poet's most valuable tool. It creates distinctions between parts of the sonnet, and allows whole concepts and ideas to be made with just the layout, without any words. The aim of this essay is to establish an understanding of the different styles and forms of sonnets, to discover how they are different and how they are the same. I will study two of Shakespeare's sonnets, and one by William Wordsworth. William Shakespeare The Shakespearean sonnet form is made up of three quatrains, a couplet. The rhyming scheme is: a;b;a;b;c;d;c;d;e;f;e;f;g;g. The rhyming couplet is useful for creating a particularly bitter, poignant, or thought-provoking point. Because the rhyming scheme involves a lot of alternating between two sounds, two things can be easily compared by them directly answering each other, better than is possible with the Petrarchan form, and descriptions of two things can be easily alternated between, to break each description into smaller pieces. Shall I compare thee to a summer's day? This sonnet is about the beauty of something or someone. It seems to be a woman, whom Shakespeare loves or admires, and how her beauty has no faults. ...read more.

The aspects of a common beautiful woman and the descriptions of the mistress are on alternate lines. The beautiful images are directly answered by the images of the mistress. This creates a very clear, direct contrast between them, and makes the mistress seem even less attractive. Because the sonnet is divided into larger sections than when using the Shakespearean form, longer, more detailed descriptions can be made of things, to create a slower moving, more thought-provoking, philosophical idea. The three quatrains are quite similar, and contain similar images. The first quatrain introduces the meaning of the sonnet, with two short descriptions that compare beautiful images to the mistress. Unlike most of the comparisons in the sonnet, they do not consist of separate lines that answer each other, and instead, each description is just on one line. This is to quickly get the idea of the poem across, and to make the beginning light, and easy to start with. The line, which states, "black wires grow" on her head uses the metaphor of wires in a strange way. The main point of it is to show that her hair is black, which was not generally thought of as making a woman beautiful. At first, the image of the wires seems to imply that her hair is wiry, but it actually doesn't. It actually only means that her hairs would be wires if all hairs were wires. ...read more.

The language used in the octave is not at all difficult to understand. The way the form separates the sonnet into two parts is used here, to create a separate easy-to-understand introduction. The sestet is more difficult to understand. It uses much more metaphorical language to describe the subject of the sonnet. The sestet still seems to be describing beauty, because Wordsworth uses images of beauty, such as "more beautifully steep". Wordsworth seems to be implying that the city in the morning is more beautiful than natural things such as a rock. The reader thinks this because Wordsworth writes that the sun did never "beautifully steep...valley, rock, or hill". One of the main ideas of the sestet is about the calm of the morning. Wordsworth suggests this in many ways, such as mentioning: "a calm so deep", "glideth" and "lying still". The calm is created because everyone is asleep in the early morning, and he expresses how he feels that everything is asleep by claiming that "the very houses" seem asleep. The sonnet form is used to create a section, which elaborates on the first, after the theme has been introduced. Shakespeare and Wordsworth have shown how the power of the form can create deep, fluent ideas that have been remembered for hundreds of years, without the minimum amount of words, and that it can completely change the face of a poem to reflect the thoughts of a completely different style, of a completely different person, of a completely different mind. ...read more.