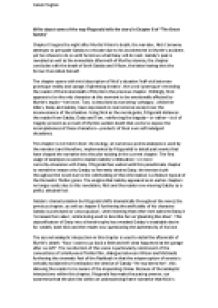 ﻿Calum Hughes Write about some of the way Fitzgerald tells the story in Chapter 8 of ?The Great Gatsby? Chapter 8 begins the night after Myrtle Wilson?s death, the narrator, Nick Carraway attempts to persuade Gatsby to relocate due to his involvement in Myrtle?s accident, yet he refuses to do so until he knows what Daisy will do next. Gatsby?s past is revealed as well as the immediate aftermath of Myrtles demise, the chapter concludes with the death of both Gatsby and Wilson, the latter having shot the former then killed himself. The chapter opens with vivid description of Nick?s situation ?half-sick between grotesque reality and savage, frightening dreams?, the word ?grotesque? reminding the reader of the brutal death of Myrtle in the previous chapter. Chillingly, Nick appears to be the only character at this moment to be emotionally affected by Myrtle?s expiry?her lover, Tom, is described as not being ?unhappy?, whilst her killers, Daisy and Gatsby, have expressed no real remorse except over the inconvenience of the situation. ...read more.

The enigma that Gatsby appeared as in earlier chapters no longer exists due to this revelation, Nick and the reader now viewing Gatsby as a pitiful, deluded fool. Gatsby?s characterisation by Fitzgerald shifts dramatically throughout the novel; the previous chapter, as well as chapter 8 furthering the artificiality of his character. Gatsby is portrayed as ?unscrupulous?, when learning that other men admired Daisy it ?increased her value?, simile being used to describe her as ?gleaming like silver?. This objectification of Daisy into a literal trophy has revealed Gatsby?s insatiable desire for wealth, both Nick and the reader now questioning the authenticity of his love. The second analeptic interjection in this chapter is used to detail the aftermath of Myrtle?s death: ?Now I want to go back a little and tell what happened at the garage after we left?. ...read more.

The setting of the chapter is used effectively by Fitzgerald to portray the crumbling relationship between Gatsby and Daisy. The chapter opens in Gatsby’s house, the description of which containing a semantic field of vacancy: ‘dust’ ‘dark’ and ‘musty’. This description signifies the stagnancy of Gatsby’s life without Daisy, it is an empty husk, devoid of purpose. The juxtaposition between this stark residence and the decadent party mansion of chapter 3 is particularly poignant, Fitzgerald using the now vacant house as an allegory for Gatsby’s hollow dreams. The vivid description of Daisy’s house where Gatsby first met her acts to reinforce the ever-increasing gap between Gatsby and Daisy, whose house is described as ‘beautiful’, ‘cool’ and most importantly ‘not musty’. Fitzgerald has used repetition of ‘musty’ along with the adverb ‘not’ to further this gap, Gatsby and Daisy are two very different beings, the façade Gatsby created has been shattered and he is left as something clearly distinguishable as being ‘not’ like Daisy. ...read more.