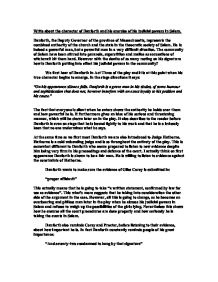 Write about the character of Danforth and his exercise of his judicial powers in Salem.

Write about the character of Danforth and his exercise of his judicial powers in Salem. Danforth, the Deputy Governor of the province of Massachusetts, represents the combined authority of the church and the state in the theocratic society of Salem. He is indeed a powerful man, but a powerful man in a very difficult situation. The community of Salem have been stirred into paranoia, superstition and malice as accusations of witchcraft hit them hard. However with the deaths of so many resting on his signature how is Danforth putting into effect his judicial powers in the community? We first hear of Danforth in Act Three of the play and it is at this point when his true character begins to emerge. In the stage directions it says: "On his appearance silence falls. Danforth is a grave man in his sixties, of some humour and sophistication that does not, however interfere with an exact loyalty to his position and his cause." The fact that everyone is silent when he enters shows the authority he holds over them and how powerful he is. It furthermore gives an idea of his serious and threatening manner, which will be shown later on in the play. It also describes to the reader before Danforth is even on stage that he is bound tightly to his work and that he is obviously keen that no one undermines what he says. ...read more.

He never attempts to look at probabilities, or weigh the defendants' motives. This again shows how narrow-minded he is. There are other instances when he also misuses his power. Two of these occur when he acts in a callous and highhanded manner with those accused of witchcraft. He bullies Mary Warren into changing her evidence and also arrests those who are simply the witnesses to the good character of the accused. When he terrifies Mary Warren who is only a "timid girl" it is said in the stage directions that he "pounds it into her". He says: "You have seen the devil, you have made compact with Lucifer have you not?" By shouting at her, it could well have scared her into changing her evidence. This is an example of injustice. Danforth manipulates a witness and the legal procedure to suit his purpose. This gives the impression that he is a malicious and cruel man who never thinks of others before himself. Danforth then does a similar thing however in this case with Elizabeth Proctor. He puts her in a difficult situation where she is torn between her husband and telling the truth. In the end she lies for the love of her husband. It was wrong of Danforth to do this as it meant that the evidence was not true. This shows how manipulative he is as he is able to use his powers to alter what people say to suit his purpose. ...read more.

The second of these reasons would tie in with how the character of Danforth has been portrayed up until this point. If so it just shows again how the lives of others come second to his position of authority. The last time we see Danforth is when he is speaking some parting words to the prisoners who are going to be hanged. These are arrogant and pitiless. "Hang them high over the town. Who weeps for these weeps for corruption" These words only lead me to believe further that he is a proud and quick-tempered man who has little humility and no compassion. He still believes them to be guilty despite the lack of tangible evidence. All in all, in the face of a dramatic situation and in the face of disagreeing and dubious evidence Danforth has an extremely difficult job to do, yet he does nothing to stop the court proceedings when he realises he could be at fault. Danforth in fact is a striking representation of a man of intelligence and apparent humanity who refuses to admit possibilities outside the strict confines of his, version of the truth. He feels contempt for many of the foolish witch-hunters and he seems to understand people, but yet he applies the law with a rigid harshness. He almost appears to be unwilling to perceive events as they really are. Overall I believe him to be a cruel man who through being afraid to admit his own fault causes the deaths of many wrongly accused people. ...read more.