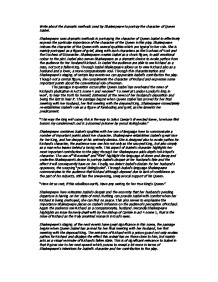 Write about the dramatic methods used by Shakespeare to portray the character of Queen Isabel.

Write about the dramatic methods used by Shakespeare to portray the character of Queen Isabel. Shakespeare uses dramatic methods in portraying the character of Queen Isabel to effectively express the particular importance of the character of the Queen in this play. Shakespeare imbues the character of the Queen with several qualities which are typical to her role. She is mainly portrayed as a figure of grief, along with such characters as the Duchess of York and the Duchess of Gloucester. Shakespeare creates Isabel as a choric figure, to add emotional colour to the plot. Isabel also serves Shakespeare as a dramatic device to evoke pathos from the audience for her husband Richard. In Isabel the audience are able to see Richard as a man, not just a fallen King. Through Isabel Shakespeare allows us to view Richard also as a husband and a lover, a more compassionate soul. Through this characterisation and Shakespeare's staging of certain key events we can appreciate Isabel's contribution the play. Though not a central figure, she compliments the character of Richard and expresses some important points about the conventional role of women. The passage in question occurs after Queen Isabel has overheard the news of Richard's abdication in Act 3 scene 4 and resolves " To meet at London London's king in woe", to hear the truth for herself, distressed at the news of her husband's deposition and being the last to hear it. ...read more.

"Thou most beauteous inn, why should hard favour be lodged in thee, when triumph is become an alehouse guest." Shakespeare uses this metaphor to outline Isabel's despair at the injustice of Richard's predicament. She cannot conceive of why Richard has been degraded publicly, when he has the God given right to rule. More so Shakespeare is eager to present the more personal side of this argument. Although Isabel is distraught at the appointed King being usurped, she is further torn apart by the fact that her husband, for whom she cares a great deal, has been humiliated and treated like a criminal. For Shakespeare the voice of Isabel accents the human and romantic aspect of Richard, which serves to gather yet more sympathy from the audience for his cause. Richard pleas with Isabel not to grieve for him, as her distress will hasten his own death. Join not with grief fair woman...my end too sudden." Richard seems to be attempting to accept his fate and move on. Subsequently Isabel's reaction sees her assert some spirit, in her shock at Richard's submission. "What is my Richard both in shape and mind transformed and weakened?" Shakespeare deliberately presents the previously unseen aspect of Isabel's person at this point, to display that in desperate circumstances Isabel alters her character,to benefit her husband. The audience observe here a strong woman, desperate to stir her newly submissive husband into action. ...read more.

The mood and tone at the end of act five scene one is used by Shakespeare to emphasise the type of relationship that Richard and Isabel share. The dramatic methods used in this part of the scene are focused on presenting the love that Isabel has for Richard, and to evoke pathos for the predicament they face. Shakespeare uses very eloquent and poetic language. The combination of stichomythia and rhyming couplets here, adds to the emotion of the dialogue. The repetition of "hand" and "heart" serves to highlight the separation this couple are about to endure. "And must we be divided? Must we part? Ay hand from hand, my love and heart from heart. Banish us both and send the King with me. That were some love, but little policy. Then whither he goes let me go." Shakespeare here has created a situation which cannot fail in provoking the sympathy and emotion of the audience. Richard has lost everything. Not only has his crowned glory been stripped from him, but his beloved wife must be parted from him too. Shakespeare through dramatic methods such as language, imagery, staging and interaction uses Isabel's character throughout the play as a device to compliment the character of Richard. Isabel appears throughout the play to grieve for Richard, to love him and to generate sympathy for him. In a play which could see Richard portrayed as the villain who let England slip into disrepair, Isabel exists to counter balance the negative aspects of Richard's personality with the positive which, if it weren't for Shakespeare's inclusion of her character would remain unseen. ...read more.