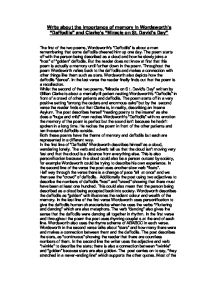 Write about the importance of memory in Wordsworth's "Daffodils" and Clarke's "Miracle on St. David's Day" The first of the two poems, Wordsworth's "Daffodils" is about a man remembering that some daffodils cheered him up one day. The poem starts off with the person being described as a cloud and how he slowly joins a "host" of "golden" daffodils. But the reader does not know at first that this poem is actually a memory until further down in the poem. Throughout the poem Wordsworth refers back to the daffodils and makes a connection with other things like them such as stars. Wordsworth also depicts how the daffodils "dance". In the last verse the reader finally finds out that the poem is a recollection. Whilst the second of the two poems, "Miracle on St. David's Day" written by Gillian Clarke is about a mentally ill patient reciting Wordsworth's "Daffodils" in front of a crowd of other patients and daffodils. The poem starts off in a very positive setting "among the cedars and enormous oaks" but by the second verse the reader finds out that Clarke is, in reality, describing an Insane Asylum. The poet describes herself "reading poetry to the insane" as she does a "huge and mild" man recites Wordsworth's "Daffodils" with no emotion the memory of the poem is perfect but the sound isn't because he hadn't spoken in a long time. ...read more.

The poet carries on to say, "they stretched in a never-ending line" which supports the other quotes. Most of the second verse goes on about how many stars there actually are. In the fourth line the poet says "Ten thousand saw I at a glance" which shows he wasn't paying attention to how many there were it also gives us the impression that the stars 'saw' him. Wordsworth makes another connection between the daffodils and the stars because they both "dance". He uses the verb "tossing" and the adverb "sprightly" to describe the way they danced. Wordsworth connects the daffodils and the stars by telling us that they both danced. Wordsworth, throughout the poem, has repeated the dancing, the daffodils and the fact that in every verse there is a mentioning of water, in the first verse it was "lake" in the second "bay" and finally in the third "waves". And again in the first line of the third verse the poet repeats the fact that he saw something dance. The mood then changes by the word "but", making the reader expect something. After all the describing of the magical and romantic atmosphere, the reader feels pessimistic that something is going to change the whole mood of the poem. ...read more.

to him and special, and only he will ever know the wonder of it even if he describes is as best as he can to others "and then my heart with pleasure fills". This is a personification as there is an image of a jug being filled to the brim with pure joy. Also there is another personification in the last verse, "and dances with the daffodils". It is a further personification of a lively person who dances. In this last line Wordsworth is saying that his heart is dancing with the daffodils. Daffodils do not dance, but to Wordsworth they give off life, joy and radiant beauty. The last three lines of verse four create an pure and lovely mood. In "The Daffodils" Wordsworth is trying to teach the reader to appreciate the beauty of nature and to understand the importance of memory. I also think that he is trying to teach the reader about how the effect of just one experience in your life can be so strong and powerful that it can be remembered as vividly as it was the day of the experience many years later. From the title "Miracle on St. David's Day" it is revealed to the reader what this poem is about. It is obvious that a miracle is the main point of the poem, meaning something holy yet unexpected. ...read more.