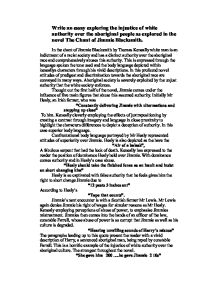 Write an essay exploring the injustice of white authority over the aboriginal people as explored in the novel The Chant of Jimmie Blacksmith.

Write an essay exploring the injustice of white authority over the aboriginal people as explored in the novel The Chant of Jimmie Blacksmith. In the chant of Jimmie Blacksmith by Thomas Keneally white man is an indictment of a r****t society and has a distinct authority over the aboriginal race and comprehensively abuses this authority. This is expressed through the language spoken the tone used and the body language depicted within keneallys characters through his vivid descriptions. In this profound novel attitudes of predigest and discrimination towards the aboriginal race are conveyed in many ways. Aboriginal society is severely exploited by the unjust authority that the white society enforces. ...read more.

In this case superior body language. Confrontational body language portrayed by Mr Healy represented attitudes of superiority over Jimmie. Healy is also depicted as the have the "Air of a balask", A fabulous serpent that had the look of death. Keneally has expressed to the reader the position of dominance Healy held over Jimmie. With dominance comes authority and in Healy's case abuse. "Healy should take the finished fence as an insult and insist on short changing him" Healy is so captivated with false authority that he feels gives him the right to short change Jimmie due to "12 posts 3 inches out" According to Healy's "Tape that counts". Jimmie's next encounter is with a Scottish farmer Mr Lewis. ...read more.

This is a horrific example of the injustice of white authority over the aboriginal culture. The strongest throughout the novel. "She gave him 200 ....he gave Jimmie 2 10s" Constable Farrell again abused his authority in a way that degrades Jimmie. These four encounters and that of the Newbey family thoroughly explore the mistreatment of Jimmie Blacksmith and the injustice of white authority over aboriginal people, Jimmies longed for attempts to be considered a respectable part of white Australia were degraded. Hate crimes inequality and predigest sent Jimmie on his murderous rampage across new south whales. If this was how Jimmie a half cast, the most respected class of aboriginal, was treated then imagine how the rest of the culture suffered. ...read more.