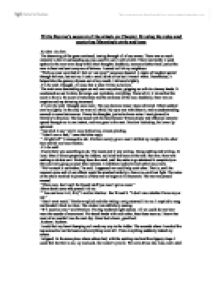 Write Bourne's account of the attack on Chapter 16 using his voice and capturing Manning's style and tone Ba-dom. Ba-dom The drumming of the guns continued, tearing through all of my senses. There was so much intensity in the air surrounding us; you could've cut it with a knife. There was hardly a word spoken as the men were deep within their thoughts. Suddenly, someone further back jostled the man in front and sent everyone of balance. I cursed as I hit my neighbour. "Walk on your own fuckin' feet an' not mine!" someone shouted. A ripple of laughter spread through the men, but not me. I took a small drink of tea but it wasn't warm. Nonetheless, it helped take the gummy dryness out of my mouth. I shivered slightly. It's the cold, I thought. At least, that is what I'd like to believe. The mist came descending upon us and was everywhere, gripping us with its clammy hands. It condensed on our tin hats, the serge, our eyelashes; everything. Worst of all, it intensified the scent in the air, the scent of rottenness and the staleness of the men. Suddenly, there was an eruption and my shivering increased. ...read more.

The alcohol was definitely rousing. "It'll soon be over," said Martlow. The fog rendered sight useless. All we could do was hear were the sounds of movement. We shook hands with each other, then those near us. I knew that most of us wouldn't see the next day. Good luck chums, good luck. Badoom. Badoom. I could feel my heart thumping as I made my way to the ladder. The seconds where I reached the top seemed to last for hours and everything went still. Then everything suddenly rushed my senses. I slipped. At the same place where others had, with the sucking mud and the slippery slope. I could feel the fear in me, icy and cold, like winter's javelin. We were drawn into lines, and a shell tore behind us, roaring in triumphant fury as it took some men. The call came for stretcher-bearers. Lucky buggers. Part of me felt envious and my dread grew but I could not turn my mind from it. My emotions were in turmoil and my endurance reached. Everything seemed to melt away before the fact that I was here and that was that. It wasn't long before we finally moved. ...read more.

Mr. Finch 'as been 'it, see? You two come along as well. And where's that bloody bomber?" We searched for groups of Germans and we engaged in an ineffective skirmish with one. It seemed as if Jakes' group had done the same, and they fell back to our position. We knew it was useless to go on. There were no other companies ahead of us and the German machine guns were all ready for us. There was a tense moment, when we were aware of people approaching, but luckily, they managed to identify themselves as Gordans before we blew them to bits. They were good fellows who'd gotten lost from their company. I was aware that Tozer and Mr. Finch were making a decision. "Sergeant, we shall retreat," said Mr. Finch. The sergeant seemed to agree. We tried to figure out who was missing and I told them of Shem. "Lucky bastard always seem to get away," said Sergeant Tozer. "Well, when I checked 'e was gettin' away on 'is 'ands and knees," said Minton. As we prepared to depart, I thought of poor Shem and how plucky and friendly he'd always been. And of the kid, of how he'd died so young. It was a mingling of pity and anger, which did not abate even when we reached our trenches. Shut the fuck up, I thought. Of course they die young. ?? ?? ?? ?? ...read more.