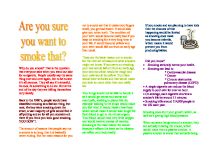 Why do you smoke? That is the question that everyone asks when you stand out side for a cigarette. People usually say the same thing over and over again, but to be honest it's all excuses. They all say it's stressful, its cool, its something to do etc. But at the end of the day they are killing themselves very slowly. Back in the 1980's, people would have classified smoking as a fashion thing, but now, if a boy were smoking down the street, a vast majority of girls would find it off putting and so for all you smokers out there if you think you look good smoking, YOU DON'T. The amount of reasons that people say not to smoke is so long, that it is basically never ending. But the main reasons for you not to smoke are that it makes you fingers smell, you get bad breath. ...read more.

* A single cigarette can reduce the blood supply to your skin for over an hour. * On average, each cigarette shortens a smoker's life by around 11 minutes. * Smoking kills around 114,000 people in the UK each year. Smoking does stunt your growth which, as well as it giving high blood pressure. When someone hangs around a smoker, they are actually inhaling the smoke, which would make them a passive smoker. A passive smoker is worse than actually being a smoker because breathing the smoke from the air is worse than taking it in through your mouth as it would cause blockages in the nose. Smoking can always cause headaches and colds and it can also give you very bad cough, also known as smoker cough. The thing that makes smoking so addictive is the nicotine that is inside them. They can be replaced with nicotine patches when and if decided to stop. ...read more.

Stopping smoking is not easy because it takes a lot of will power and determination because it can be extremely difficult, but the government provides a lot of help because they want the nation to become healthier. That is also another reason for the cigarettes being brought up in prices because they want to try to get people of them. There are products out there that can be brought to help you give up smoking like nicotine patches as well as little sticks that you can inhale which would make believe you that your smoking as it gives you the same feeling but you would not be inhaling any smoke which is safer for you and the people around. With some individuals, they try to stop completely all a sudden but it is them type of people that would either most likely go back and start smoking again, or not touch another one for the rest of your life, but for people who find it hard to stop smoking, there is help provided by the NHS and also on the internet as they would be happy to give advice. ...read more.