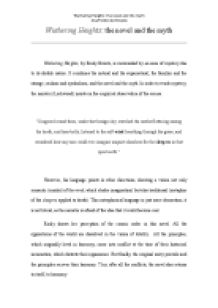 Wuthering Heights, by Emily Bront, is surrounded by an aura of mystery due to its double nature. It combines the natural and the supernatural; the familiar and the strange; realism and symbolism; and the novel and the myth.

ï»¿Wuthering Heights: the novel and the myth Ana Perdiz de Oliveira Wuthering Heights: the novel and the myth ________________ Wuthering Heights, by Emily Brontë, is surrounded by an aura of mystery due to its double nature. It combines the natural and the supernatural; the familiar and the strange; realism and symbolism; and the novel and the myth. In order to evade mystery, the narrator (Lockwood) insists on the empirical observation of the scenes. "I lingered round them, under that benign sky; watched the moths fluttering among the heath, and hare-bells; listened to the soft wind breathing through the grass; and wondered how any one could ever imagine unquiet slumbers for the sleepers in that quiet earth." However, his language points in other directions, showing a vision not only romantic (symbol of the wind, which eludes imagination) but also traditional (metaphor of the sleepers applied to death). This metaphorical language is just mere decoration; it is not literal, as the narrator is afraid of the idea that it could become real. ...read more.

Since then, each being, now walking on two legs each, lives in a desperate search for its other half in order to become complete again. The myth of the soul mates represents the human search for completeness and perfection. All living creatures aim to return to the original condition of perfect unity. The part of the myth in which Zeus splits the perfect creature in two halves for being provocative towards the gods, symbolizes the need to become fragmented in order to achieve knowledge, and therefore, the genuine perfection (it is when they are separated that Heathcliff becomes reach and the master of both Wuthering Heights and Thrushcross Grange), because some ask, "How could one ever be perfect if he was never given the opportunity to sin?" III. MYTH OF CUPID AND PSYCHE In this myth, a mortal marries an immortal from whom is separated after disobeying a command. Wuthering Heights can be interpreted as a myth of loss (Heathcliff loses Catherine), exile, rebirth and return (Heathcliff returns twelve years later being rich and powerful) ...read more.

Lockwood is a parodic version of Heathcliff. Oedipus conflict can also be applied at a social level from the moment in which Heathcliff incorporates capitalism. In the novel, the given solution given is to take advantage of the separation between the sphere of production and the family one caused by capitalism, displacing thereby the energy of change to the first one and turning the second one into the space of order and orderly control of social subjectivity. The above solution is just a fantasy because each sphere affects the other. Part of the peculiar power of Wuthering Heights derives from its resistance to imagine any solution of stable ?commitment?, as it can be seen in the final sense that everything can happen again. VIII. MYTH OF NARCISSUS The anarchic energy of the capitalist individual could be used in the service of the revitalizing transformation of the social order, which would avoid the risk of a collective revolution. The narcissist link not only joins Lockwood and the reader, but also both of them with the problem of the novel: the relationship between the dream of autonomy and control of the modern individual and the social order in a time of profound historical change. ...read more.