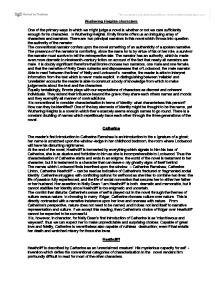 Wuthering Heights characters One of the primary ways in which we might judge a novel is whether or not we care sufficiently enough for its characters. In Wuthering Heights, Emily Bronte offers us an intriguing array of characters and narrators. There are two principal narrators in this novel which throws into question the authority of the narrator. The conventional narrator confers upon the novel something of an authenticity of a spoken narrative. The presence of the narrator is comforting, since the narrator is by virtue of his or her role, a survivor: the narrator must survive to tell the retrospective tale. The narrator has an authority, which is made even more dramatic in nineteenth-century fiction on account of the fact that nearly all narrators are male. It is doubly significant therefore that Bronte chooses two narrators, one male and one female, and that the narrative of Nelly Dean outranks and dispossesses that of Lockwood, the male narrator. Able to read 'between the lines' of Nelly and Lockwood's narrative, the reader is able to interpret information from the text which is never made explicit. In distinguishing between 'reliable' and 'unreliable' accounts the reader is able to construct a body of knowledge from which to make judgements about the text and the characters. Equally tantalisingly, Bronte plays with our expectations of characters as discreet and coherent individuals. They extend their influence beyond the grave; they share each others names and moods and they exemplify all manner of contradictions. ...read more.

Nelly's constant reference to Edgar as 'the master' reveals her opinion of him as someone with social power. Heathcliff on the other hand is a cuckoo with no established parentage or inheritance. His lack of formal education places him in an inferior social position. Edgar Linton is described as lacking spirit and this can be read in two ways. Conventionally, he does lack the vigour that characterises Catherine and Heathcliff. However, he also lacks their ghostliness, the spectral quality which sets them apart and lends them mystery. He is not troubled by internal contradiction, and he remains in his place throughout the novel, living at Thrushcross Grange as boy and man, and finally resting in his grave alongside the body of his wife. Isabella As Edgar's sister, Isabella's characterisation is closely associated with his. Indeed, she is only ever seen in relation to other characters. Isabella's infatuation for Heathcliff, which structurally parallels Edgar's fascination with Catherine, fails to develop into a mature and unselfish love. Isabella's infatuation with Heathcliff is as a direct result of her cultural life: she can only read Heathcliff as a romantic hero and she never entirely abandons her fantasy of Heathcliff as the Byronic lover even when it is clear that his spontaneous love of Catherine has transformed itself into a determined l**t for revenge, for which Isabella is only a cipher or vehicle. Linton Linton Heathcliff is a contradiction in terms. ...read more.

Nelly acts as a surrogate mother to many of the motherless characters in this novel: she brings up Hareton for the first five years of his life; she cares for Cathy from birth through to her marriage to Linton; she regrets the brevity of her charge of Linton, which is forced by circumstance; and she acts as confidant and advisor to Catherine and Heathcliff. She also acts as a mother-figure to Lockwood as she nurses him back to health. As surrogate mother Nelly provides food and moral sustenance to her nurslings. Nelly Dean is most carefully, consistently and convincingly created for us as the normal woman, whose truly feminine nature satisfies itself in nurturing all the children of the book in turn. This reading of Nelly as the mother-figure alerts us to another of her roles, for Nelly is a mother goose, the teller of this fairytale, the keeper of its wisdom. The name might also be a corruption of Mother Gossip. Both of these definitions are pertinent to the figure of Nelly, since the knowledge she conveys is at least twofold: it is about women's experience, and it is about the nature of love. Nelly knows that her story has to entertain and ensnare us. Yet her voice is rooted in the realist narrative. With her love of a well-brushed hearth and gleaming copper pans, Nelly weaves for us a fairy tale of mythic proportions. Given our narrator's sympathies we are inevitably drawn to the novel's celebration of passion, and find the strictures of its dominant discourses of marriage and religion as stifling and incomprehensible as do its main protagonists. ...read more.