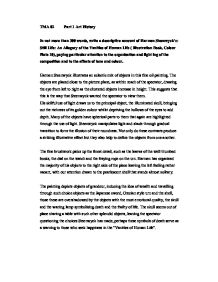 TMA 02 Part 1 Art History In not more than 300 words, write a descriptive account of Harmen Steenwyck's: Still Life: An Allegory of the Vanities of Human Life ( Illustration Book, Colour Plate 10), paying particular attention to the organisation and lighting of the composition and to the effects of tone and colour. Harmen Steenwyck illustrates an eclectic mix of objects in this fine oil painting. The objects are placed close to the picture plane, as within reach of the spectator, drawing the eye from left to right as the clustered objects increase in height. This suggests that this is the way that Steenwyck wanted the spectator to view them. His skilful use of light draws us to the principal object, the illuminated skull, bringing out the richness of its golden colour whilst depriving the hollows of the eyes to add depth. Many of the objects have spherical parts to them that again are highlighted through the use of light. Steenwyck manipulates light and shade through gradual transition to form the illusion of their roundness. Not only do these contrasts produce a striking illustrative effect but they also help to define the objects from one another. The fine brushwork picks up the finest detail, such as the leaves of the well thumbed books, the dial on the watch and the fraying rope on the urn. ...read more.

Alongside this immense fear of death, is the concern with time, the repetition of "When I" beginning both quatrains of the octave and introducing the sestet, stresses Keats preoccupation with time and the fear of it consuming him. This sense of time running out is emphasized through the enjambment in the third quatrain; the final line runs into the closing couplet, urging the reader on. The rhyming scheme, abab cdcd gg, helps to intensify the poems train of thought and has great effect in the closing couplet as Keats resolves his fears by declaring the triviality of love and fame, "love and fame to nothingness do sink." The octave and the sestet share the continuity of rhyme, and underlying theme of death, though there is a clear change in the range of emotions as the sonnet develops. The octave concentrates on the emotions of confusion and fear whilst the sestet focuses on the fear of loving and being loved until reaching a feeling of acceptance over his fears. TMA 02 Part 3 Music For this part of the TMA you will need to listen to Track 10 on the TMA CD. You will hear the "First Tableau: The Shrovetide Fair" from Petrushka by Stravinsky. Listen to the track a few times and then answer the question below in up to 300 words on continuous prose. ...read more.

The earth is flat. D.) Eating people is wrong. E.) Oranges are not the only fruit. All women who give birth are mothers. The Queen has given birth. The Queen is a mother. Rain clouds can only form over plains. It rains in Spain. The rain in Spain falls mainly on the plain. People cannot walk any other surface than horizontal. People walk the earth. The earth is flat. Eating people is illegal. If something is illegal, it is wrong. Eating people is wrong. Every morning I eat fruit. I never eat oranges. Oranges are not the only fruit. Arguments A and E are both sound arguments, as the premises for both are al true, and it follows that if the premises to an argument are true then the conclusion must be true. Arguments B and C fail at being sound arguments as the information used can be disproved. Argument D is not sound, as in some countries and within some cultures cannibalism is legal. 2. Give an example of an inductive argument, and explain why it is not deductive. I've owned lots of cars. All the cars I've owned have had four wheels. All cars have four wheels. This argument cannot be deductive because it is based purely on assumption. I'm assuming that all cars have four wheels because I've only owned cars with four wheels; however the volume of cars I've owned is minute in comparison to the variety of models and makes. Therefore, I cannot presuppose that every car follows the same rule. ...read more.