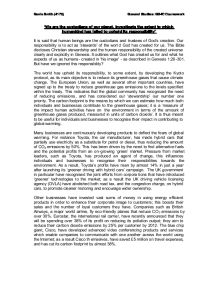 'We are the custodians of our planet. Investigate the extent to which humankind has failed to uphold its responsibility' It is said that human beings are the custodians and trustees of God's creation. Our responsibility is to act as 'stewards' of the world God has created for us. The Bible discloses Christian stewardship and the human responsibility of the created universe clearly and explicitly in Genesis. It outlines what God has created us for and what he expects of us as humans- created in 'his image' - as described in Genesis 1:26-301. But have we ignored this responsibility? The world has upheld its responsibility, to some extent, by developing the Kyoto protocol, as its main objective is to reduce its greenhouse gases that cause climate change. The European Union, as well as several other important countries, have signed up to the treaty to reduce greenhouse gas emissions to the levels specified within the treaty. This indicates that the global community has recognized the need of reducing emissions, and has considered our 'stewardship' our number one priority. The carbon footprint is the means by which we can estimate how much both individuals and businesses contribute to the greenhouse gases; it is a 'measure of the impact human activities have on the environment in terms of the amount of greenhouse gases produced, measured in units of carbon dioxide'. ...read more.

Culture change on this scale cannot be initiated overnight, small changes are required and the next generation of adults must be better educated to enable changes on this scale to occur. However, American companies are also very much at fault. However, it is always easy to criticise others. Businesses the world over only exist by making profit, so have UK owned British Airways really purchased 'greener' planes for the good of the Earth? Or is this another stunt for them to increase its sales/profits? Considering that British Airways have been depicted in the media as an 'unethical' business recently, I suggest this is a ruse to increase its customer base. This is the same with energy providers, where they burn fossil fuels, such as coal and gas, because it's the cheapest way to produce electricity. This is constantly decreasing the planet's natural supplies, which in recent years have been shown to be decreasing so rapidly that some experts say that fossil resources will be depleted within the next thirty years. Other businesses have failed in their responsibilities towards the earth, in particular those that cut down rainforests all over the world. For centuries these have been habitats for animals, and homes to plants that God has planted; plants which have in the past provided cures for terminal illnesses, such as cancer. ...read more.

Our civilization does not always cause destruction intentionally, although our disparaging intentions are consequential; a good example of this is the phenomenal growth in the number of cars in the world. I think our intentions are good, but our practice lacks conviction. I believe that humankind is not really aware of the responsibility demanded of them. It is true certain things have been recognised but only small things are being changed; it makes you consider whether it is in fact a little too late. We should consider our children's futures, how they will tackle the planet's deterioration caused by global warming that we've caused? Rather than worrying about the cars we drive, and the wood flooring we want in our homes, we should be thinking of our children's heritage. The Bible states, (Genesis 2:15), "And the Lord God took the man, and put him into the Garden of Eden to dress it and to keep it, the drive to serve the garden in which we have been placed." The human race should therefore be investing a much larger portion of their income in ensuring our future is 'green'. Word count: 1,598 Resources Wikipedia - http://en.wikipedia.org/wiki/Stewardship_(theology) (04/05/08) http://en.wikipedia.org/wiki/Kyoto_Protocol Biblical Quotations & Kyoto Protocol Research BBC News - http://news.bbc.co.uk (04/05/08) Business Research (i.e. British Airways, Toyota, & Cisco Systems) ?? ?? ?? ?? Gavin Smith (4179) General Studies: GB4C Coursework Un ...read more.