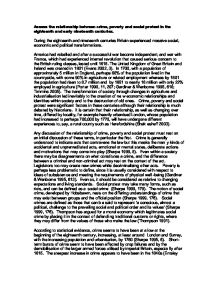 Assess The Relationship Between Crime, Poverty And Social Protest In The Eighteenth And Early Nineteenth Centuries.

Assess the relationship between crime, poverty and social protest in the eighteenth and early nineteenth centuries. During the eighteenth and nineteenth centuries Britain experienced massive social, economic and political transformations. America had rebelled and after a successful war become independent; and war with France, which had experienced internal revolution that caused serious concern to the British ruling classes, lasted until 1815. The United Kingdom of Great Britain and Ireland was created in 1801 (Evans 2002, 3). In 1700, with a population of approximately 5 million in England, perhaps 80% of the population lived in the countryside, with some 90% in agriculture or related employment whereas by 1801 the population had risen to 8.7 million and by 1851 to nearly 18 million with only 22% employed in agriculture (Porter 1990, 11, 207; Gardiner & Wenborne 1995, 610; Timmins 2005). The transformation of society through changes in agriculture and industrialisation led inevitably to the creation of new economic relationships and identities within society and to the destruction of old ones. Crime, poverty and social protest were significant factors in these centuries although their relationship is much debated by historians. It is certain that their relationship, as well as changing over time, differed by locality, for example heavily urbanised London, whose population had increased to perhaps 700,000 by 1770, will have undergone different experiences to, say, a rural county such as Herefordshire (Shakesheff 2003). Any discussion of the relationship of crime, poverty and social protest must rest on an initial discussion of these terms, in particular the first. Crime is generally understood to indicate acts that contravene the law but this masks the many kinds of accidental and unpremeditated acts, emotional or mental states, deliberate actions and motivations that may come into play (Sharpe 1999, 5). ...read more.

A lack of humane response on their part, in Archer's words 'misread deferential behaviour for deferential attitudes' (Archer 2000, 10). The government reaction to riots may reveal something of the elite perception of how valid they were. In their combined actions, the Luddites and Swing had caused only two deaths while at the same time the damage to property was considerable (Horn 2005). Initial waves of Luddism in 1811-12 caused perhaps �100,000 worth of damage to looms and factories. It is this perhaps that explains to some extent the decision of the government to field more troops to crack down on Luddism, some 12,000, in 1812, than were fielded in the Peninsular Campaign against Napoleon in 1808. Frame-breaking became a capital crime and between 1812-17, 36 Luddites were hanged followed later by 19 Swing Rioters. Protest crime formed only a small percentage of prosecution, peaking at 8.5% in 1831 and of the number that took part in the riots only a small part ended up in court (Archer 2000, 87). Furthermore, many death sentences were commuted to transportation and many rioters were released without charge. It has also been noted that in comparison to food rioters, protesting the price of grain caused by bad harvests and war, suffered hanging less often (Archer 2000, 28-30, 87). Many have noted the increase in legal concern for property in the eighteenth century embodied by the 'Bloody code' (Sharpe 1995, 8). Between 1660 and 1819, there were 187 capital statutes enacted into the law, mostly concerning property (Hughes 1988, 29). Many of the new Acts explicitly embodied a repressive state and criminalized the poorest labouring classes and were passed in reaction to riots or social unrest (Linebaugh 1991, 16). ...read more.

Certainly, not all social unrest can be seen in terms of poverty or the defence of custom. It seems that the strong tradition of this kind of action speaks of attempts to control the means of livelihood as opposed to warding off poverty. However, the reality and threat of widespread poverty in particular areas and spheres of employment must be seen as a strong motivating force in any action. As for crime, it cannot be doubted that much crime was necessitated by poverty. Equally to account this as the only factor would be facile, since it ignores the personal and individual aspects of each crime. It is tempting though to see an increasing concern for goods and materials throughout this period of increasing production and the defence of property in law would seem to follow from that. Hughes comments that the rule of law became the supreme ideology in this period (1988, 29). Increasing economic rationalisation and market capitalism placed workers livelihoods and working traditions in jeopardy and this, coupled with price fluctuations and an increasing population undoubtedly increased crimes of necessity, although it should not be forgotten that while real crime may have increased, the means of measuring crime became more accurate and more actions became criminal. The concern with property perhaps inevitably led to doubts over the legality of customary appropriation, such as gleaning. But while such 'rights' may have been disputed over centuries, the changing economic and social factors and the rise of the law and legalism in the eighteenth and nineteenth centuries inevitably led to them taking on a different significance that would have long lasting repercussions in the social relations and perceptions of people in Britain. ...read more.