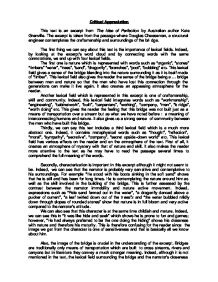 Critical Appreciation This text is an excerpt from The Idea of Perfection by Australian author Kate Grenville. The excerpt is taken from the passage where Douglas Cheeseman, a structural engineer contemplates the craftsmanship and surroundings of the bridge. The first thing we can say about this text is the importance of lexical fields. Indeed, by looking at the excerpt's word cloud and by connecting words with the same connotations, we end up with four lexical fields. The first one is nature which is represented with words such as "organic", "stones" "timbers" "water", "trees", "sand", "dragonfly", "branches", "pool", "bubbling" etc. This lexical field gives a sense of the bridge blending into the nature surrounding it as it is itself made of "timber". This lexical field also gives the reader the sense of the bridge being a ... bridge between men and nature so that the men who have lost this connection through the generations can make it live again. ...read more.

It also makes the reader more attentive to the text as he may have to read the passage several times to comprehend the full meaning of the words. Secondly, characterization is important in this excerpt although it might not seem to be. Indeed, we can see that the narrator is probably very sensitive and contemplative to his surroundings. For example "He stood with his boots sinking in the soft sand" shows that he is still and has been for long times. He is contemplating the nature around him as well as the skill involved in the building of the bridge. This is further assessed by the contrast between the narrator immobility and nature active movement. Indeed, expressions such as "Pale sand fanned out in the water", "a dragonfly danced above a pucker of current", "a leaf twirled down out of the trees"z and "the water bubbled mildly down through slopes of rounded stones" show that nature is in full bloom and very active compared to the narrator's attitude. ...read more.

Here these two worlds are one of thriving nature and one of a tamed environment disrespected by humans and their way of living. The narrator is therefore that much important as we is one of the few men who can deeply understand nature and contemplate it without need, without greed. Finally, we can say that the last line of the text "True was the words carpenters used. It was as if they thought there was something moral about it" shows that the skilled craftsmen who have erected this bridge not only wanted to make it sturdy, or nice-looking but as a commemoration of the link between men and their surroundings, between men and nature. As a conclusion we can say, that the writer conveys many different atmospheres in this text. We have seen that nature is an appeasing presence, that there is a certain amount of mystery involved in the "upside-down world". We have also shown that the character is one of the few comprehensive and sensitive human beings around and the there is a strong sense of nearly religious thought behind the building of the bridge. ...read more.