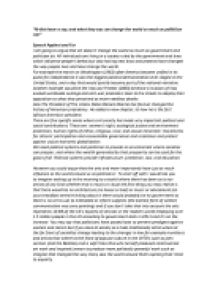 Discuss the statement &quot; Art changes the world as much as government and politicians do&quot;

﻿?Artists have a say, and what they say can change the world as much as politician can? Speech Against and For I am going to argue that art doesn?t change the world as much as government and politician do. All individuals are living in a society ruled by the government and laws which influence people?s behaviour also having new laws and protests have changed the way people lives and have change the world. For example the march on Washington (1963) after America became unified in its quest for independence it was the biggest political demonstration ever staged in the United States, and a day that would quickly become part of the national narrative. Another example would be the Iraq war Protest (2003) America's invasion of Iraq evoked worldwide outrage and anti-war protestors took to the streets to display their opposition to what they perceived as more needless deaths. Also The President of The Unites States Barack Obama has forever changed the history of American presidency. He added a new chapter, to how he is the first African American president. There are five specific areas where civil society has made very important political and social contributions. ...read more.

All these are all affected by politics and government. Political rights have changed the world and have a big impact on how individuals live their lives now days, for example the role of women: during the whole of the nineteenth century, women had no political rights though there had been some movement in other areas to advance the rights of women. In 1839, a law was passed which stated that if a marriage broke down and the parents separated, children under seven years of age should stay with their mother. In 1857, women could divorce husbands who were cruel to them or husbands who had left them. In 1870, women were allowed to keep money they had earned. In 1891, women could not be forced to live with husbands unless they wished to. These were very important laws which advanced the rights of women, in the later years of the nineteenth century; women wanted one very basic right - the right to vote. This was strictly known as the right of suffrage (the right to vote). The original movement for women's political rights was a non-violent one lead by Millicent Fawcett. ...read more.

With between half a million and a million protesters it was one of the largest demonstrations in East German history and a milestone of the peaceful revolution that led to the fall of the Berlin Wall and German reunification. Politician can argue that art isn?t highly effective as a mode of direct political action. Even though Arts functions best as a site where personal critical consciousness can be developed, and is one of the area where the preconditions of direct political involvement are formed. Now there is a suggestion that art can, through intimate identification, create empathy. This means that art challenges the viewer not just visually or through the intellect, but through their whole emotional, spiritual, ethical and psychological being. In conclusion I agree with the statement that ?Artists have a say, and what they say can change the world as much as politician can? even though politics and government have a bigger impact in our society as it?s more influential as every day we are currently on knowledge on the laws and news about government, on the other hand art can change the world as artist musician etc.. Have made a difference as they influenced people?s beliefs as they might change the way they see the world around them, and they might see life in a different prospective. ...read more.

****
Some very good and not so good arguments are put forward. The whole essay needs a better structure ie arguments for one side then the other and then a conclusion. The essay improves as it goes along. The writer should have proof read. If they cannot be bothered to go through it then many markers will wonder why they should.