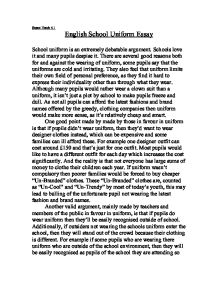 Stuart Hatch 4.1 English School Uniform Essay School uniform is an extremely debatable argument. Schools love it and many pupils despise it. There are several good reasons both for and against the wearing of uniform, some pupils say that the uniforms are cold and irritating. They also feel that uniform limits their own field of personal preference, as they find it hard to express their individuality other than through what they wear. Although many pupils would rather wear a clown suit than a uniform, it isn't just a plot by school to make pupils freeze and dull. As not all pupils can afford the latest fashions and brand names offered by the greedy, clothing companies then uniform would make more sense, as it's relatively cheap and smart. One good point made by made by those in favour in uniform is that if pupils didn't wear uniform, then they'd want to wear designer clothes instead, which can be expensive and some families can ill afford these. ...read more.

For example if some pupils who are wearing there uniform who are outside of the school environment, then they will be easily recognised as pupils of the school they are attending so the school could easily contacted if the pupils were misbehaving. Furthermore teachers, police or members of the public spot pupils outside of school when there meant to be inside. The school could be notified of this, and the appropriate action taken. Were as if pupils did not wear uniform, then no one would know what school they go to thus they wouldn't be as easily recognised. Moreover if pupils didn't wear uniform and outsiders entered without permission then they would be difficult to spot as everyone would be wearing regular clothes. However there are many people apposed to uniform as well. Most of these are pupils, and they argue that uniform is uncomfortable and too cold or too hot, depending what time of year it is. ...read more.

For example people who have interests in Rock music tend to wear darker, "Baggy" clothing. At the moment some pupils even go as far as acting differently as they are not aloud to wear what they choose. An example of this could be by causing trouble in school. If pupils are comfortable with what their wearing, then they might concentrate more on their work, inside of being worried about how they look. To conclude there is no correct answer to the uniform debate. As there are many good points to both sides of the argument. Personally I am neither for nor against the wearing of uniform. I am in favour of a compromise were pupils should be aloud to wear what they want but it should be either black or white and shouldn't be branded. This lets pupils express themselves as individuals but doesn't encourage competition as brand names wouldn't be aloud. Pupils would still be easily recognised as well because pupils would be either wearing black or white, smart clothes. ...read more.