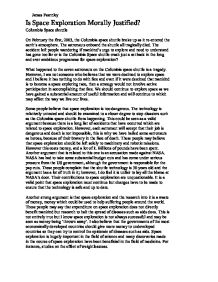 Is Space Exploration Morally Justified? Columbia Space shuttle On February the first, 2003, the Columbia space shuttle broke up as it re-entered the earth's atmosphere. The astronauts onboard the shuttle all tragically died. The accident left people wandering if mankind's urge to explore and need to understand has gone too far or is the Columbia Space shuttle crash just a set back in the long and ever ambitious programme for space exploration? What happened to the seven astronauts on the Columbia space shuttle is a tragedy. However, I am not someone who believes that we were destined to explore space and I believe it has nothing to do with fate and even if it were destined that mankind is to become a space exploring race, then a strategy would not involve active participation in accomplishing that fate. We should continue to explore space as we have gained a substantial amount of useful information and will continue to which may affect the way we live our lives. ...read more.

These people may say that expenditure on space exploration does not directly benefit mankind but research to halt the spread of diseases such as aids does. This is not entirely true but I know space exploration is not always successful and may be seen as money being 'thrown away'. I also believe that the governments of the most economically developed countries should give more money to undeveloped countries so they can try to control the epidemic of diseases such as aids. Space exploration is hugely important in the field of science and many discoveries made in the course of space exploration have been beneficial in the field of medicine. For instance, studies on the effect of weightlessness. One interesting view is that space and beyond has nothing to do with the human race. So spending vast sums of money to try and find out more about it is wrong, especially when it involves endangering the lives of people. ...read more.

The space exploration that has already been conducted has opened the minds of millions of people and sparked thought, even if it is unrealistic. I think that space exploration has not just furthered our knowledge of the skies but it has also been able to show people that there is more to their life than what directly affects them. Space exploration has brought a huge leap in our knowledge and understanding of the solar system. Through the travels of each astronaut, new worlds that previously could not have been thought up have been realised. There will always be casualties of space exploration but this does not mean you can call the exploration morally unjustifiable. The bounds of human possibilities have been extended to unimaginable levels. To be human is more than to just survive: civilized societies hunger for beauty, truth, and knowledge. To stop our capability and desire to explore is not only unthinkable, it's impossible. If you could ask any of the seven astronauts who perished on the Columbia space shuttle if they held any regret for the cause for which they died, I'm certain they'd tell you no. James Fearnley ...read more.