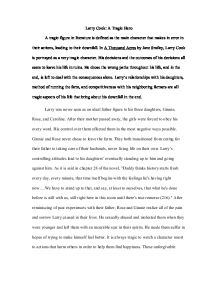 Larry Cook: A Tragic Hero A tragic figure in literature is defined as the main character that makes in error in their actions, leading to their downfall. In A Thousand Acres by Jane Smiley, Larry Cook is portrayed as a very tragic character. His decisions and the outcomes of his decisions all seem to leave his life in ruins. He chose the wrong paths throughout his life, and in the end, is left to deal with the consequences alone. Larry's relationships with his daughters, method of running the farm, and competitiveness with his neighboring farmers are all tragic aspects of his life that bring about his downfall in the end. Larry was never seen as an ideal father figure to his three daughters, Ginnie, Rose, and Caroline. After their mother passed away, the girls were forced to obey his every word. His control over them affected them in the most negative ways possible. Ginnie and Rose never chose to leave the farm. They both transitioned from caring for their father to taking care of their husbands, never living life on their own. ...read more.

In hopes of pleasing his daughters, Larry chose to divide the shares of his farm amongst Ginnie, Rose, and Caroline. The farm, his most prized possession, was a very important part of his life and it was hard for him to let that go. He knew that someday he would no longer be able to care for such a large part of land, so he tried to control the future of the farm before he was already gone. When Caroline opted out of Larry's decision, Ginnie and Rose were left with portions of the farm to take control of. While taking on these new responsibilities, they were also expected to care with their aging father, Larry. Larry was grateful for their commitment to him at first, but in the end, he took them for granted. He gave them a gift and then took it away. He chose to watch them suffer only to fulfill his own selfish needs. Larry hoped to watch Ginnie and Rose suffer by suing them to gain back the land he gave to them. ...read more.

Larry harmed others more than he realized. He loved to watch neighbors, especially Harold, fail and used their failure to help increase his value of himself. This thrill of competition led to his madness, allowing the readers to see the tragic downfall of his character. Larry Cook is one of the most complex characters in Smiley's novel, A Thousand Acres. His actions often went unexplained and not many readers are able to understand him and relate to him as a character. His story as displayed in the novel is one of a true tragic hero. Common characteristics of a tragic figure in literature are that they discover that they have brought the suffering upon themselves, and they see that their fate was revealed by their own actions. Larry's most tragic quality was his way of searching for happiness. He felt that the only way to find happiness was to push others down along the way. He watched others suffer, and this eventually led to his broken life. His disturbing treatment of his daughters, his appetite for power of his land, and his competitive nature led to his broken family, broken farm, and potentially breaking himself, which is a tragedy within itself. ...read more.