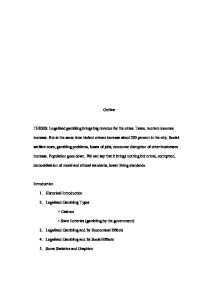 Outline THESIS: Legalized gambling brings big revenue for the cities. Taxes, tourism incomes increase. But at the same time violent crimes increase about 200 percent in the city. Social-welfare costs, gambling problems, losses of jobs, economic disruption of other businesses increase. Population goes down. We can say that it brings nothing but crime, corruption, demoralization of moral and ethical standards, lower living standards. Introduction 1. Historical Introduction 2. Legalized Gambling Types + Casinos + State Lotteries (gambling by the government) 3. Legalized Gambling and Its Economical Effects 4. Legalized Gambling and Its Social Effects 5. Some Statistics and Graphics 6. One Example for Legalized Gambling: Minnesota Conclusion Historical Introduction Gambling was popular in North America long before the USA was founded. "Playing cards and dice were brought by the British. By the end of the 17th century, just about every country seat in colonial America had a lottery wheel. Cockfighting flourished throughout the countries, especially in the South. Bear Baiting was also a popular sport, but the Puritans banned it." (Orbitz, 1984, p. 46) "Almost 100 years later gambling in the West gave gambling a second life. Early church leaders struck down all forms of gambling and so in the East gambling for the most part died completely. Far from both government controls and moral interference of reform groups in the East, gambling became so popular in the West that Monte tables were often setup in the middle of the town." (Donovan, 1978, p. 78) The first private lottery was established for Washington DC beautification in 1823.But the organizers absconded with the proceeds and they never paid the prize. Lotteries were not the only type of gambling during this time. Horseracing was popular type of gambling. It was not neither quite as organized nor popular as today. It was limited to a few friendly bets between owners of horses and their partisans. The first racetrack in North America was built on Long Island in 1665. ...read more.

Cities get big amounts of taxes from casinos. But cities spend more money than they get on negative effects of gambling such as crime increase. Crime increases with legalized gambling. This effects the police cost. Gambling addiction creates more poor people which increase the welfare cost. State lotteries target the poor and receive money from the poor. They cash their welfare checks at racetracks, riverboat casinos, off track betting parlors. This also increases the welfare cost too. It also effects medical system. Treatment for gambling addiction is rarely covered by health insurance policies, though physicians often will simply list depression as the cause for needed therapy, and that may be covered.(Lesieur and Anderson, 2004) "Gambling produces human desperation. Gambling victimizes the poor. Gambling leads to embezzlement, bribes, extortion, treason, suicide, and corruption of college and professional athletes. Crime often results from victims trying to recoup gambling losses. Those who least can afford it usually gamble the most. Gambling exploits the weaknesses of individuals. Gambling and poverty go hand in hand. Inner-city residents are hurt the most by expanded gambling" (Legalized Gambling Facts, 2004) "There is a substantial economic case to be made against gambling. It involves simply sterile transfers of money or goods between individuals, creating no new money or goods. Although it creates no output, gambling does nevertheless absorb time and resources. When pursued beyond the limits of recreation . . . gambling subtracts from the national income." (McGraw and Hill, 1970, p. 89) Gambling attracts racketeers and mobsters, increases the crimes such as murders, assaults robberies, etc. Nowadays mobsters do not own the casinos. But they still are involved in gambling business with food, security, cleaning etc. services. So gambling still feeds the mobsters this way or another way. Addicted gamblers are much more likely to be violent with their spouses and abuse their children. Children of these gamblers generally do worse in school and have a suicide rate twice that of their classmates.(Orbitz, 2002) ...read more.

While the poor do not spend much more gambling than middle income families, they do spend a much higher percentage of their income. Casinos increase the gambling addiction in women and young people in the town. At this time gambling is called "the fastest-growing teenage addiction, with the rate of pathological gambling among high-school and college-age youth about twice that of adults." (Lesieur and Anderson, 2004) "In Atlantic City, the lure of gambling is so strong that over thirty thousand underage people are either thrown out, or stopped from entering the casino."(Vogel, 1997) Years ago counseling cost for gambling addiction was low compared to today. This was because relatively few states allotted much money for the treatment of them. With gambling addiction, cost of treatment increased too. Most health insurance companies sees gambling as a moral problem and do not pay for treatment. "After thorough examination of the gambling industry, we find that it is not in the best interest of anyone for numerous reasons. For starters, it is not good for the individual because the legalization of gambling is closely related with the increase of many compulsive gamblers. It is also unfavorable for the individual, because it will lead a person who would never commit a crime on their own, to steal to finance their habit."(Orbitz, 1984) Gambling also ruins the family life. Many gamblers are alcoholics and beat their spouse and neglect or abuse their children. The community where the casino located is hurt. The community expects money which comes from the casino and tourism. But the casino creates gamblers from the town population. The majority of gamblers come from the town. Money which is suppose to be spent in local stores goes to the Casino. The state and local governments are losing and will be losing on this. Compulsive gamblers cost big amounts of money for governments. It is probably put best in the quote "once gambling starts, it does not slow down and there can be no standing in its place for those who would stop it's spread"(McGraw and Hill, 1970, p. ...read more.