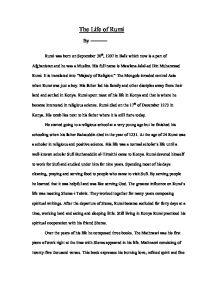 The Life of Rumi By ====== Rumi was born on September 30th, 1207 in Balk which now is a part of Afghanistan and he was a Muslim. His full name is Mawlana Jalal-ad Din Muhammad Rumi. It is translated into "Majesty of Religion." The Mongols invaded central Asia when Rumi was just a boy. His father led his family and other disciples away from their land and settled in Konya. Rumi spent most of his life in Konya and that is where he became interested in religious science. Rumi died on the 17th of December 1273 in Konya. His tomb lies next to his father where it is still there today. ...read more.

They worked together for many years composing spiritual writings. After the departure of Stems, Rumi became secluded for forty days at a time, working hard and eating and sleeping little. Still living in Konya Rumi practiced his spiritual cooperation with his friend Shems. Over the years of his life he composed three books. The Mathnawi was his first piece of work right at the time with Shems appeared in his life. Mathnawi consisting of twenty-five thousand verses. This book expresses his burning love, refined spirit and fine intelligence. Another piece of work he created was called the Divan-I Kebir. This book was composed of over forty thousand couplets. This is the most widely translated pieces of work out of the three. ...read more.

At the time of his death he had been writing poems for over forty years. He died at the age of 66 years old. After his death Muslims, Jews, Arabs, Christians, Turks, Persians and Romans honored him at his funeral. That night of his funeral was named Sheb-ul Arus and now is a festival on that date. Rumi created a new kind of writings. He created poems which contained people's emotions which was entirely new because many poets back then didn't write about that. Living to the age of 66 was very uncommon because of the lack of medicine and the food nutrition in everyone's life. Rumi became a legend and is now known throughout the whole world and his poems have been read by millions. ...read more.