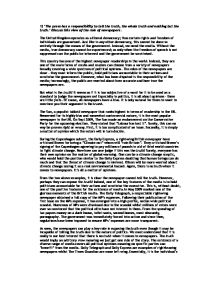 Media in the United Kingdom

1) 'The press has a responsibility to tell the truth, the whole truth and nothing but the truth.' Discuss this view of the role of newspapers. The United Kingdom operates as a liberal democracy; thus certain rights and freedom of individuals are guaranteed. Just like in any other democracy, this cannot be done so entirely through the means of the government. Instead, we need the media. Without the media, true democracy cannot be experienced; as only when the freedom of speech is not suppressed can the public be informed and the government be scrutinised. This country has one of the highest newspaper readerships in the world. Indeed, they are one of the main forms of media and readers can choose from a variety of newspapers broadly covering a wide spectrum of political opinions. ...read more.

They stated that "Labour has lost it". Surely, this can no way be proven right or wrong. First, it is too complicated of an issue. Secondly, it is simply a matter of opinion which the voters will in turn decide. During the Copenhagen submit, the Daily Express, a right-wing British newspaper have criticised Brown for being a "Climate nut" whom will "ruin Britain". They criticised Brown's signing of the Copenhagen agreeing to pay millions of pounds in aid of third world countries to fight climate change. Now how can one judge if this was the truth? Surely, everyone has their own opinion on the matter of global warming. One can be a climate change sceptic, who would hold the position similar to the Daily Express doubting that human beings can do much and that the threat of climate change is minimal. ...read more.

From the spending of tax papers money on a duck house, toilet seats, second homes, most obscurely, pornography. The government was immediately forced into action and since then, regulations have been imposed to ensure MPs' expenses are more transparent. As seen, the newspapers can play a key role in exposing the truth even though it may be incapable of telling the truth due to the nature of politics. We must understand that it is really in our best interest that there is no truth when it comes to newspapers. The truth would imply an arbitrary view meaning we just get one side of the story. The existence of a diverse range of media covers all political opinions meaning no specific parties can "benefit" from the media. Daily Telegraph and Daily Express are examples of right-leaning newspapers whilst The Times Guardian are more left wing. Essentially, it is the individual's responsibility to take an interest in understanding politics and deciding what the truth to them is. ...read more.