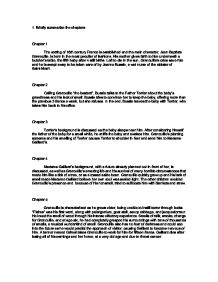 1. Briefly summarize the chapters Chapter 1 The setting of 18th century France is established and the main character, Jean-Baptiste Grenouille, is born in the most peculiar of fashions. His mother gives birth to him underneath a butcher's table, the fifth baby after 4 still births. Left to die in the sun, Grenouille's cries save him and he is swept away to be taken care of by Jeanne Bussie, a wet nurse of the cloister of Saint-Merri. Chapter 2 Calling Grenouille "the b*****d", Bussie talks to the Father Terrier about the baby's greediness and his lack of smell. Bussie tries to convince her to keep the baby, offering more than the previous 3 francs a week, but she refuses. In the end, Bussie leaves the baby with Terrier, who takes him back to his office. Chapter 3 Terrier's background is discussed as the baby sleeps near him. After considering himself the father of the baby for a small while, he sniffs the baby and awakes him. Grenouille's piercing screams and his smelling of Terrier causes Terrier to shudder in fear and send him to Madame Gaillard's. Chapter 4 Madame Gaillard's background, with a future already planned out in front of her, is discussed, as well as Grenouille's amazing life and his survival of many horrible circumstances that made him like a tick of a tree, or as a tossed aside bean. ...read more.

He becomes lost in his dreams after smelling the perfume. Chapter 16 The next morning, Grenouille goes to Grimal, pays for the goatskin, and invites the tanner to the Tour d'Argent to negotiate the purchase of Grenouille for the large sum of twenty livres, saying that he needs unskilled help. Grimal would later become so drunk that he would mistake one road for the other and dies in the waters of the Quai des Ormes. Grenouille sleeps content in his bed. Chapter 17 Baldini's reputation grows to a national level. Nuit Napolitaine is sold out over the course of a day. Every month would a new perfume be made under Baldini's "division of labor and increased productivity". Baldini would jot down the formula of Grenouille's perfumes after they had been made, satisfying "his thirst for rules and order", in two book, one locked in a fireproof safe and the other carried with him at all times. Grenouille learns how to jot down the formulas himself after a few weeks at work. Two prerequisites had to be met, however, to make the scents within Grenouille: Grenouille had to obtain the cloak of middle-class respectability in order to carry out his true goals; the other being the knowledge of the craft itself for higher ends. ...read more.

It's an amusing change of pace in Suskind's writing and establishes the liveliness of the perfume shop. 4. What connections do you see to Crime and Punishment or any work you read last year? Grenouille's birth during "one of the hottest days of the year" can be linked to the main setting of Crime and Punishment, where the novel takes place during one of the hottest summers in St. Petersburg. Suskind's devotion to detailing all sorts of olfactory imagery can be linked to the intricate details Flaubert put forth in his writing of Madame Bovary. Free, indirect discourse is used throughout the novel as well, a narrator-related link to Madame Bovary. 5. Select a chapter from Part II and reflect on what you have read: Plot, Style, Culture, Author Plot wise, the first chapter of Perfume establishes the setting of the novel and introduces the main character, Grenouille, as he is born. His mother gives birth to him underneath a butcher's table and is promptly executed after revealing that her previous four births were left to die in the sun, just as she had tried to do with Grenouille. Grenouille avoids possible death from being sent to Rouen after Officer La Fosse hands him over to a cloister in Saint-Merri, where he is baptized as Jean-Baptiste. The style of the chapter is written in a free flowing sort of way, with Suskind writing such incredible imagery of smells in a rather surprisingly compelling list form. ...read more.