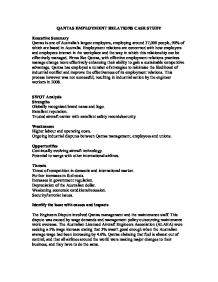 QANTAS EMPLOYMENT RELATIONS CASE STUDY Executive Summary Qantas is one of Australia's largest employers, employing around 37,000 people, 90% of which are based in Australia. Employment relations are concerned with how employers and employees interact in the workplace and the way in which this relationship can be effectively managed. Firms like Qantas, with effective employment relations practices manage change more effectively enhancing their ability to gain a sustainable competitive advantage. Qantas has employed a number of strategies to minimise the likelihood of industrial conflict and improve the effectiveness of its employment relations. This process however was not successful, resulting in industrial action by the engineer workers in 2008. SWOT Analysis Strengths Globally recognised brand name and logo. Excellent reputation. Trusted aircraft carrier with excellent safety records/security. Weaknesses Higher labour and operating costs. Ongoing industrial disputes between Qantas management, employees and unions. Opportunities Continually evolving aircraft technology. ...read more.

As they refused to work, hundreds of flights were affected, delaying passengers all around the world. This not only affected the passengers but also Qantas as it was left short staffed unable to fulfil its services. Impact on Stakeholders In this case, all stakeholders had a vested interest in resolving the industrial conflict as quickly as possible as it is an extremely expensive exercise for all parties involved. Employees lost wages while employers lost profits and potential customers. Suppliers lost revenue as they sold less to Qantas. And finally customers were left flightless and angered as they were left stranded due to the grounding both international and domestic flights. Overall, this is a continuous cycle with Qantas ultimately losing profits. Outline specific procedures or instruments used to resolve/attempt to resolve dispute/conflict Qantas started using managers, all of whom it has said are qualified aircraft engineers, to plug the gaps when engineer workers walk off the job, however the union was concerned at the safety compliance of those managers and it led to a shift in perception that Qantas had reduced its commitment to safety. ...read more.

The new EBA delivered improved efficiency for Qantas and a 4.6% annual wage increase and improvements to superannuation. The agreement also secured all previous worker entitlements including sick leave and redundancy provisions and did not contain any mandatory overtime banks. This will bring in significant improvements to the way safety is managed within the airline by addressing those issues critical to its maintenance. As a result, employees were able to increase their pay and working conditions, with minimal job losses as well as, retaining engineer positions from being outsourced. It ensured that engineers can take rest periods after working overnight, as well as professional development programs to ensure engineers remain at "the cutting edge of aviation technology". It is clear that flexibility is the key to Qantas's employment relations and overall success. By responding quickly to changing influences on employment relations, Qantas has managed to further its organisational goals while maintaining an effective relationship with its employees. Qantas must continue to respond to the changing business environment if the company is to maintain its employment relations success in the future. ...read more.